Perdue: USDA will do everything ‘legally possible’ to help Ark farmers
skip to main content
News - 2017 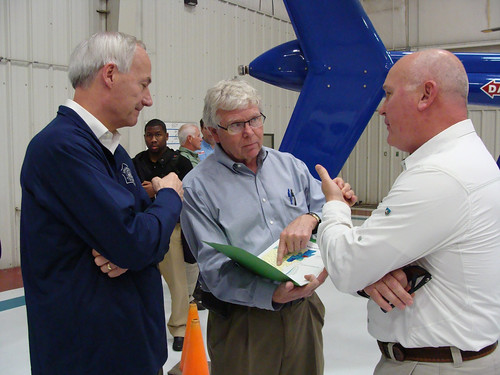 Perdue, Gov. Asa Hutchinson, Sen. John Boozman, and U.S. House members Rick Crawford and French Hill, took to the sky Sunday afternoon to get a first-hand look at the damage caused by storms that hit the Mid-South April 27-30. All spoke at a news conference held in the Arkansas State Police hangar at the Little Rock airport.

Hutchinson also said Sunday that “starting Wednesday, FEMA will be in Arkansas working with our regional teams to assess that damage.”

“The president asked me to come down here and take a close look; obviously, for the impact [to] Arkansas agriculture,” Perdue said. “We’ve had our share of natural disasters in agriculture, but boy, you all are trying to set a record here … Obviously in ’11 and even some last year, and this year as well.”

When asked if the trip was necessary, he said, “There’s no substitute for seeing it. The president wanted me to come and get a first-hand view so I can come back and advocate on behalf of Arkansans to let him know exactly what’s going on here.”

Before the news conference, the delegation met with Mark Cochran, vice president-agriculture for the University of Arkansas System Division of Agriculture, to discuss the estimates and the situation.

“Dr. Cochran and his team are already about that and will take the extension service, county directors both from FSA and the extension service all over the state” to get the assessment done, he said. “As soon as that report is given to the governor, he’ll send it up to us. I’ve committed to him that we will expedite that turnaround on that declaration as quickly as possible.”

Cochran said that the Division of Agriculture “will have some new numbers out early next week.”

“The Division of Agriculture is actively working in three primary areas: estimates of economic losses from the flood and rain – essential for disaster declarations; assistance to the farmers for the tough replant and land management decisions they will face when the water recedes; and the role our county extension offices will play in overall community assistance as the affected counties deal with this tragic event,” he said.

The assessment will also include more detail.

“We’ll start estimating some expected yield losses from having to replant,” Cochran said. “With the late dates for the replanting, we know that’s going to result in considerably lower yields.  That’s in addition to the lost costs from seed, fertilizer, land preparations and herbicide that they’ve already invested.”

Cochran said the Division of Agriculture would also look into the effect of on-farm storage and gauge “the severity of the losses of grain grown last year that we were hoping we could find markets for. We will also begin to estimate losses to irrigation and other equipment once the fields dry.”

“We have great sympathy for the ag industry and we will try to get these numbers as soon as we possibly can,” he said.

Crawford, who represents the flooded district, said Perdue has a couple of unique qualifications that could help Arkansas agriculture.

“There are two things here with our secretary: one, he’s a Southerner. Why that matters is because here in Arkansas, we wrestle with this day in and day out, in Washington. That We have such an inordinate representation of Midwest agriculture in Washington, so having that counterbalance at the administrative level is critical,” he said.

“Second, he’s a farmer. He speaks our language. He knows what you’re talking about. We’ve got a ‘twofer’ … and we appreciate that.”

Hill told the group that “I’m here to send a signal that the whole delegation, not just the First Congressional District, is impacted by this because agriculture is the Arkansas economy.”

The flooding points out the importance of surface water control infrastructure, he said.

“This just illustrates the importance of our surface water control system on our rivers: The Black, the White, the Arkansas, the Mississippi and for our rice industry, the critical nature of using surface water and moving it across the Grand Prairie,” Hill said. It’s “something I hope we consider when we look for major ways to have public and private money support our infrastructure.”

More than once, Perdue remarked on the strength of the farming community.

“I just got to hand it to our ag interests. They are the most resilient people I’ve ever seen. While they may be covered up in water right now, they’re going to be back out there as soon as this water recedes, doing what they’ve always [been] doing, feeding a hungry world.”