By Ryan McGeeney
U of A System Division of Agriculture
May 5, 2017

(923 words)
(Download a MS Word version of this story here.)

LITTLE ROCK – Arkansas farmers who speedily planted rice in places where it hadn’t been for years, may suffer a double whammy both from losses due to flooding and the tight restrictions for replanting placed on them by the 2014 Farm Bill.

Arkansas has suffered record flooding from heavy rain that fell April 28-30 and was followed up by additional rain Wednesday and Thursday. 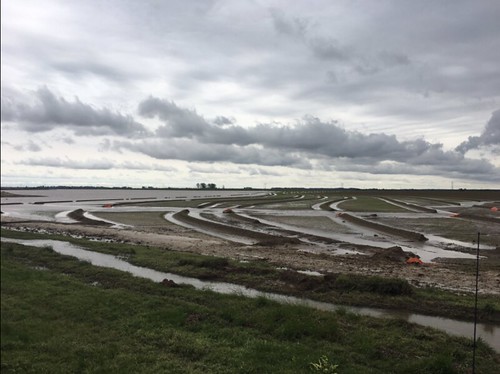 Jarrod Hardke, extension rice agronomist for the University of Arkansas System Division of Agriculture, said at least 100,000 acres of rice planted in April was likely lost to flooding, and at about 200,000-300,000 additional acres of planted rice would likely be adversely affected as cresting waters in the Black, White, Cache, Current and St. Francis rivers continue south through the state.

“Every indication we have is that it’s not just going to get worse, it’s going to get far worse than we expected it to be just a day ago,” Hardke said Tuesday.

“And we haven’t even gotten to the ‘downstream’ conversation yet,” he said, noting that as various major rivers converge, they may exceed their banks and levees and cause flooding, even in areas that have not received the torrential rainfall seen in the northern counties of the state.

Farmers are no strangers to dealing with crop loss, whether due to weather or other factors beyond their control. When the loss comes this early in the season, replanting is often the go-to strategy for recouping as much of a grower’s initial investment as possible — and is, in fact, required by many crop loss insurance policies.

An estimated 1.2 million acres of rice were expected to be planted this year, some of it in areas that hadn’t hosted the crop in years, such as seldom-dry river bottoms and flood plains that growers have typically planted with soybeans.

Arkansas growers suffered similar flooding in 2011, but this year’s flooding will likely be much more financially painful because almost twice as much rice is already in the ground this season. According to data from the U.S. Department of Agriculture’s National Agricultural Statistics Service, about 45 percent of planned rice acreage had been planted before the major flooding in late April, 2011. This year, about 89 percent of planned rice acreage is already in the ground.

“There’s a huge difference between having to take ‘prevented planting,’ — just not being able to get a crop in the ground — and having a crop in and growing, with all the costs associated with that already having been spent, and then lose it,” Hardke said. “It’s a drastic difference, when it comes down to the potential devastation to these farming operations.”

According to data from the USDA’s Risk Management Agency, more than 8,000 crop insurance policies were sold to cover rice operations in Arkansas for the 2017 growing season. About 1,670 of those plans are for catastrophic coverage, meaning growers can recoup about 50 percent of the estimated market revenue of the lost crop. The rest of the policies are “buy-up” policies, with higher coverage levels and premium costs.

New language in the 2014 farm bill, however, may put rice growers in a bind, as the end of the optimum planting window approaches.

Replanting a lost rice crop with additional rice runs counter to the historical habits of many growers, who prefer to replant with soybeans or other crops that have later optimum planting windows, he said. Requiring growers to plant rice well into the first and second weeks of June would likely mean a steep loss in yield potential.

“May 25 is considered the final optimum planting date for rice in the mid-south,” Hardke said. “The window extends for another 15 days after that. So until mid-June, you’re required by the rules of the crop insurance to replant rice — the problem is, planting rice in the middle of June essentially locks you into the expectation of a 30 percent lower-than-optimum yield, compared to planting in early April. And that’s nowhere close to being reasonable — or profitable.”

“That part of the language is potentially going to have a very negative effect on our rice growers,” he said.

Robert Coats, professor of economics for the University of Arkansas System Division of Agriculture, led a team of agricultural economists and other farm policy experts in a widespread effort to educate growers about changes in the 2014 Farm Bill before important crop loss insurance deadlines. He advised all growers dealing with flooding to immediately contact their crop insurance agent and file claims, so that agents can begin making determinations.

While the state’s largest crop, soybeans, may not be as deeply affected as rice, with about 45 percent of an estimated 3.5 million acres already planted, the record-high acreage may have additional consequences for growers who do intend to replant in soybeans: scarcity of seed.

“We were expecting to have the highest soybean acreage we’ve had since 1998,” Hardke said. “Usually, at this point in a crop loss situation, everybody starts looking to soybeans again. But when planted acres are already high, seed supplies get tight, so finding viable best options for that is going to be tougher.”