By Fred Miller
U of A System Division of Agriculture
May 5, 2017

(Download a MS Word version of this story here.)

FAYETTEVILLE, Ark. — Heavy rain caused heavy floods in northwest Arkansas on April 29 in large part because there was no where else for all that water to go.

Colin Massey, Washington County agent for the University of Arkansas System Division of Agriculture, said the ground was already saturated from earlier rains, leaving no capacity to absorb any of the rains on Saturday. 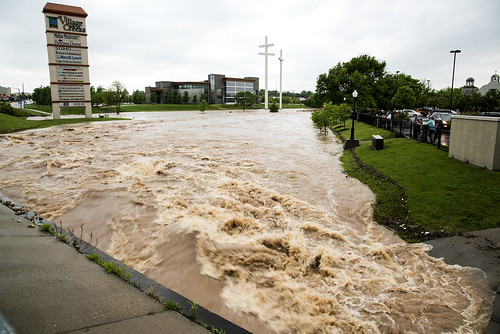 “It’s like it was falling on concrete,” Massey said. “It couldn’t do anything but run off.”

Brian Haggard, Division of Agriculture biological and agricultural engineer and director of the Arkansas Water Resources Center, said more than 14 inches of water fell in the month of April. Water flowing from White River into Beaver Lake peaked at about 30,000 cubic feet of water per second on two days just three days apart on April 27 and 30.

Massey said a lot of the impact from the floodwaters is erosion. “There was sheet erosion from hillsides, eroded trenches and a lot of soil washed off of construction sites,” he said.

As floodwater recedes from northwest Arkansas, landowners are taking stock of what was left behind.

Ted Collins, Washington county executive director for the USDA Farm Service Agency, said floodwater tore down fences and breached ponds on many farms. “The water also left behind debris, trash and rocks that have to be cleaned up,” he said.

Berni Kurz, Washington County extension staff chair for the University of Arkansas System Division of Agriculture, echoed Collins’ assessment of farm damage. His own farm, like many others in the area, suffered downed fences and a breached pond.

“I had 9.75 inches on my farm outside of Fayetteville,” Kurz said. “My farm ponds overflowed hard.’

Kurz said some areas are still unaccessable and he hasn’t been able to assess all the damage. One pond, designed to control excess rainwater, overflowed and sent water downstream toward roads and homes. He found considerable erosion on the dam side of the pond that he expects will require repair.

Kurz has observed damage in several areas of the county, including to homes in the Illinois River basin. “Erosion in riparian areas of some fields carved out big trenches,” he said. “And folks along the Illinoise River — wow!”

“Most of the water ran off pretty quickly,” Skinner said. As it went, the water damaged field roads and drain culverts that will have to be repaired.

The center’s Savoy unit, 12 miles west of Fayetteville, also had some damage to fences and forest roads, Skinner said.

Haggard said a rain event like the one in April is difficult to prepare for. Climate change projections, he said, suggest more extreme weather patterns with episodic cycles of heavy rain and drought could become more common.