As Robertson, extension cotton agronomist for the University of Arkansas System Division of Agriculture drove through Cash in Craighead County, he said, “there are a lot of rice fields where I could not even see the levees.” 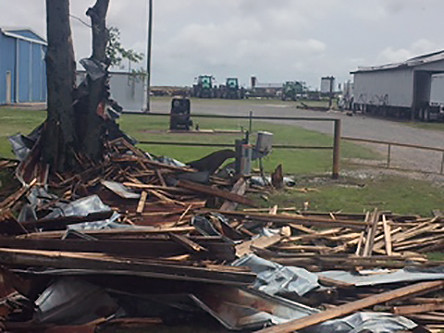 Robertson’s workday drive came less than 24 hours after powerful storms moved out of the state. The high winds and heavy rain were blamed for seven deaths and Gov. Hutchinson declared a state of emergency. Some of the higher 24-hour rainfall totals reported by the National Weather Service ranged from 10.59 inches at Rogers, 10.12 at Elm Springs, 9.1 inches at Farmington, and 8.5 inches at Savoy, 7.85 inches at Guy and 7.82 inches at Georgetown.

“They got it bad up in Missouri and northwest Arkansas had flooding in the White River watershed,” said he said. “When it all comes together, there’s going to be some big water.”

Northern Arkansas was hard hit and many river gauges were at major flood or even record stages.

In Randolph County, there was a sickening sense of déjà vu. In 2011, the county suffered terrible flooding from the Black River. This week, the river at Pochahontas was expected to crest a full 12 inches above its previous record. On Monday, the mayor ordered a mandatory evacuation for the eastern side of the city.

“It’s devastating, to say the least,” said Mike Andrews, Randolph County extension staff chair. “We have thousands of acres of row crop several feet under water and looks as if more are going to be under before it is all over. There are several roads closed across the county, many miles of fence are for sure gone.”

“There is major flooding along Current and Little Black rivers in western Clay County and thousands of acres of rice and corn will be impacted,” said Stewart Runsick, extension staff chair for Clay County at Corning. “I am sure replanting will be necessary in many fields. We had the best stand of corn that I had seen in many years.”

The weekend’s heavy rain and twisters were not the only weather affecting farming. Snow in the Oklahoma panhandle and western Kansas was causing angst among wheat growers there and the commodity markets awoke with a start on Monday.

“The grains are up sharply with wheat and corn leading the way,” said Scott Stiles, extension economist for the Division of Agriculture. “The talk is that about 20 percent of the Kansas wheat crop may see some serious damage resulting from the low temperatures.”

The severe weather will likely put the kibosh on planting this week across the Corn Belt.

“If planting conditions do not improve by the end of this week and into the next week, we may see some additional acres shift to soybeans,” he said. “That would just add further pressure to soybean prices if the remainder of the growing season turns favorable.”

Here’s a look at the crop situation as of early Monday afternoon:

“Essentially all of our corn had been planted due to the relatively good planting conditions in March-April of this year,” said Jason Kelley, wheat and feed grains agronomist for the University of Arkansas System Division of Agriculture. “We have or will have a considerable amount of corn that will have flood water or standing water on the fields.

“We will experience several kinds of damage on corn, the most obvious being the flooded fields and the quicker the water gets off the fields, the better,” he said. “A small corn plant can handle flooding for a short time, but if the flood stays on the fields for a week or more, it is going to be tough for the corn to make it.  I

“If the water recedes in a couple days, we have a much better chance for a normal corn crop,” Kelley said. “We are also seeing considerable soil erosion in some fields, exposing the corn root system, which may make the plant more prone to late season lodging.”

“It’s just a mess,” Robertson said. “It’s cold. It’s 52 degrees in my pickup. When temperatures get below 60 degrees, the cotton plant just does not grow.

“While the plant’s not growing, our disease causal agents, they just love this temperature. They’re growing strong and the cotton has no way to outgrow or defend against that,” he said. “With it being this cloudy and staying cool, the disease is going to get in front of the cotton.”

In Mississippi County about 1,000 acres of young cotton was damaged by hail.

“We have go to get some decent temperatures and some sunshine and not keep getting kicked when we’re down on the ground,” Robertson said.

In several counties, rain and flooding has eroded or destroyed levees, washing out rice fields.

Jarrod Hardke, extension rice agronomist for the Division of Agriculture said if more flood waters descend on Arkansas from Missouri and the Ohio Valley, “I believe it's possible we could lose up to 100,000 rice acres in the state from this event.  We will then see what happens with replants and whether any goes back to rice.”

“Many acres will survive that have gone under, but there are too many environmental factors in play to say for certain now,” he said. “And complete levee loss in many fields will risk loss due to washing and inability to manage.”

Hardke also warned that “problems are about to arise over new crop insurance policy provisions about ‘practical to replant’.”

Hardke was posting information about insurance at http://Arkansascrops.com.

“Luckily, only a little over 40 percent of the soybean crop has been planted,” he said. “Most of the worst damage is from Prairie County north to Randolph and Mississippi counties. Hail damage was confined to south eastern Craighead County to northeastern Poinsett County.

“For either hail or flood damage, we will not be able to see the true effect for five to seven days after the hail event or when the water recedes,” Ross said. “This time period will give the small plants time to continue to put on new growth if not damaged extensively.”

Kelley said winter wheat acreage was down compared to some years and most of the wheat was planted in fields that were not flood-prone.

“However, most fields are showing lodging from the high winds and heavy rains, which will potentially reduce yields and slow harvest,” he said.

The flooding adds another layer of difficulty for growers in their battle against weeds.

“Usually going under a flood causes herbicides to break and more will be needed,” said Bob Scott, extension weed scientist with the Division of Agriculture. “With replants, you have got to watch label limits and replant intervals if changing crops.”

For information about flood recovery, contact your county extension office or visit www.uaex.uada.edu.