JONESBORO, Ark. – Soybeans and cotton acreage are expected to expand in 2017 compared to last year, while rice, corn and grain sorghum acres will slide in a landscape shaped by markets, cost of production and ability to borrow, experts with the University of Arkansas System Division of Agriculture said on Friday. 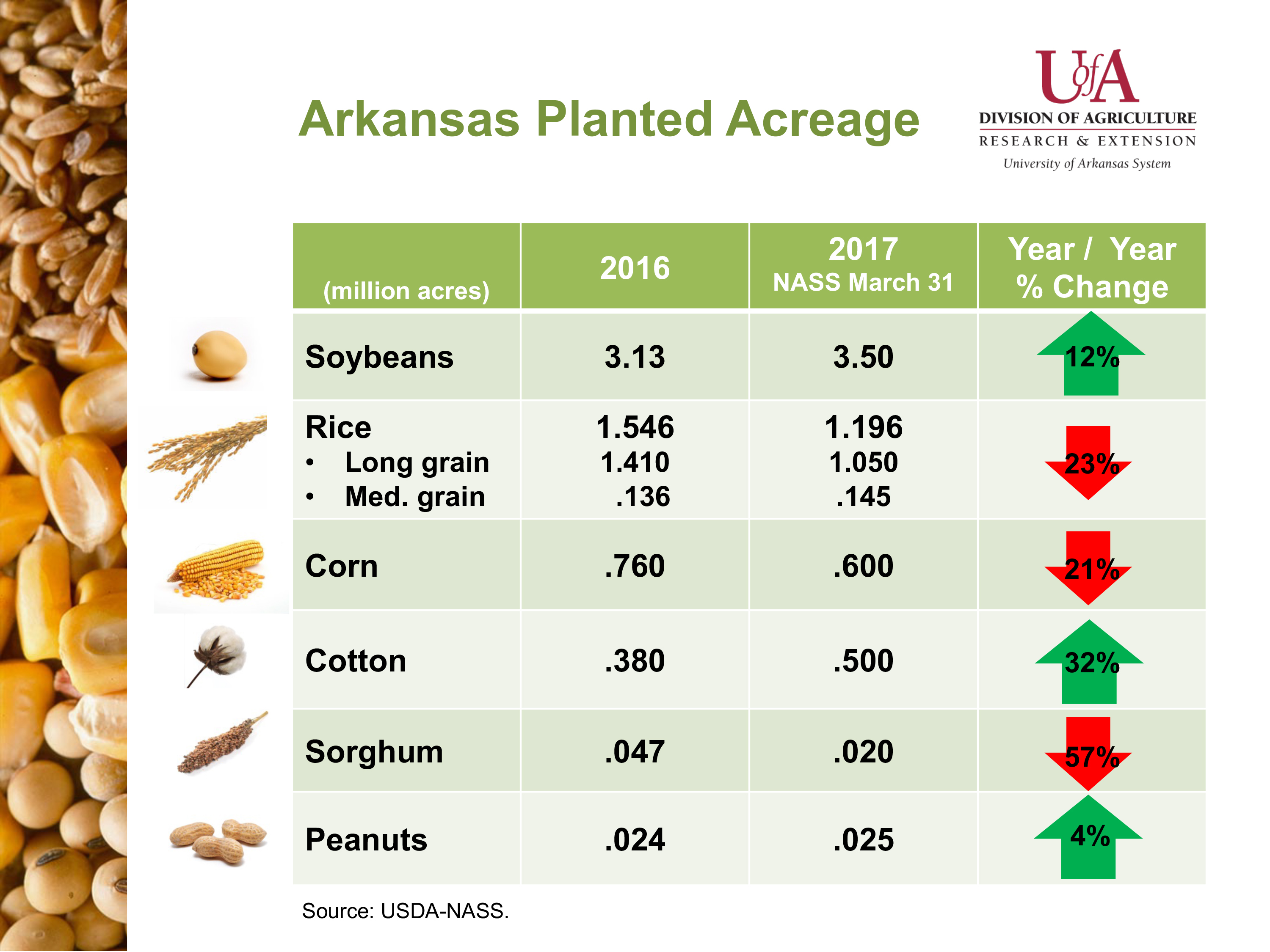 The estimates in Friday’s “Prospective Plantings” report are based primarily on surveys conducted during the first two weeks of March. The report is issued annually by the National Agricultural Statistics Service of the U.S. Department of Agriculture.

“Today’s report did not reveal an unexpected outcome,” said Scott Stiles, extension economist for the University of Arkansas System Division of Agriculture. “Pre-report expectations included a large increase in soybean acreage and a noticeable increase in cotton.”

“When you consider where soybean and cotton prices were trading early in the month it’s obvious why those two crops gained acres,” he said.

The size of the increase in Arkansas’ cotton acreage was a bit of a surprise considering the fact December cotton has traded between 70 and 75 cents year to date. Considering the amount of cotton equipment that's been liquidated in recent years, “I thought this might limit the acreage response to price somewhat,” he said.

Stiles said “It’s likely our remaining gins are underutilized and can handle the expected 1 to 1.1 million bales of volume. The key question is, ‘do we have the picking capacity available to harvest the crop timely?’”

Rice and corn acres were expected to decline considering their price relationship to soybeans and cotton.

September rice futures were down about $1 per hundredweight compared to last year as of March 1.

“New crop rice prices at that time were around $4.34 per bushel net, which is not very attractive when soybean bids are in excess of $10,” he said. “But, there are a number of factors that go into planting decisions. The previous year’s yields and challenges are a consideration as well as cost of production and grower’s borrowing capacity. It’s likely more than just price competitiveness played a role in the rice acreage decline.”

From a broader perspective, U.S. and world corn supplies are very heavy and “we just didn’t see corn prices bid aggressively in recent months for acreage,” Stiles said. “The $4-dollar-level was likely needed to get the attention of growers and the number of markets around state that offered that price were limited. Growers had to be close to feed mills or the poultry industry to get offers of that level or better.”

Since the planting intentions survey was taken earlier this month, soybean prices have declined sharply from a high of $10.33 on March 1 to Friday’s settlement of $9.54.

“That may, in turn, increase our final rice and corn acres given a favorable planting window for those crops,” Stiles said.

“I’m very surprised at the number they have for Arkansas cotton – a half-million acres,” said Bill Robertson, extension cotton agronomist for the Division of Agriculture. “Before last week, my magic number was around 400,000.”

Robertson said in speaking with consultants and the Boll Weevil Eradication Board, he revised this expectations to 15 to 17 percent above last year’s acreage, which would put us at somewhere around 430,000 acres. Today’s estimate is 70,000 acres more than we thought we were going to have. I think that’s a little high.

“If that’s the number we end up planting, I sure hope we have a good fall. We have people planting cotton that don’t have the harvesting equipment. People with pickers are stretched thin.

A wet fall could keep growers out of the fields or lengthen time for harvest, adding cost and stressing the already thin supply of cotton pickers.

Sorghum is projected at 20,000 acres, down from the 47,000 acres planted in 2016. Stiles said this would be the lowest number of acres for Arkansas in records back to 1948. Nationwide, sorghum for all purposes was expected to be down 14 percent from last year. “If realized, acres planted to sorghum in Arkansas, Georgia, Mississippi and Missouri will be the lowest on record.” NASS said that Kansas and Texas accounted for 75 percent of expected acres in the U.S.

“I would agree with the NASS estimate on peanut acreage for Arkansas at 25,000,” said Travis Faske, extension plant pathologist for the Division of Agriculture. The rise reflects “the number of acres peanut that companies like Birdsong Peanut and Golden Peanut and Tree Nuts are able to contract in the state.”

He said “some of this increase is related more storage, as Birdsong is building a larger warehouse in Portia (in Lawrence County) to store the 2017 crop. Another reason is related to better peanut prices from 2016.”

As with last year, most of Arkansas’ peanut acres are in Craighead and Mississippi counties, followed closely by Lawrence and Randolph. Most of the growers are expected to plant the Georgia 06G and Georgia 09B, runner market type peanuts that have been good yield producers in Arkansas, Faske said.

“It is still a little early to think about peanut planting, but we did have one grower plant a small field last year in mid-April,” he said.

The expanding acres in Arkansas could also splash over into another 4,000 acres in Missouri, as some growers plant in both states.

Overall acres of rice were projected to decline to 1.196 million acres, down 350,000 from 2016. That would be the lowest number of acres since 2013. Medium grain acres are projected to climb 10,000 acres to 145,000. Even if actual plantings do decline, Arkansas would still remain the state with the highest number of rice acres.

“Total rice acres for Arkansas are in line with my expectations which were 1.1-1.2 million acres,” said Jarrod Hardke, extension rice agronomist for the University of Arkansas System Division of Agriculture. “However, I believe intentions have lowered since the survey was likely conducted to put us more in line with 1.1 million acres.

“Of that, I believe the total long grain rice acres are lower at around 900,000 and medium grain acres are higher at around 200,000,” he said “If rice acres do in fact fall to 1.1 million acres that would represent approximately a 29 percent decrease in Arkansas rice acres compared to 2016.

“It would still not be surprising to see acres fall below 1.1 million similar to 2013, or they could rise back up toward 1.2 million based on reductions in soybean prices in response to the large increase in U.S. soybean acres,” Hardke said.

The increase in Arkansas follows the upward trend across the country, which is expected to rise 7 percent to 89.5 million acres.

Arkansas’ 2017 winter wheat plantings were projected at 195,000 acres, the same as the previous year.

Nationwide, the 2017 winter wheat crop was estimated at 32.7 million acres, down 9 percent from 2016. “This represents the lowest planted acreage on record,” NASS said.

The survey for Friday’s report included a sample of approximately 83,300 U.S. farm operators. Data from operators was collected by mail, internet, telephone, or personal interview to obtain information on crop acreage intentions for the 2017 crop year.

For more information about agricultural economics or agronomy, contact your county extension office or visit www.uaex.uada.edu.