By Emily Thompson
U of A System Division of Agriculture
March 17, 2017

FAYETTEVILLE, Ark. – Warmer temperatures coupled with a few heavy rains have made the invasive fire ant population in Arkansas active earlier than normal. 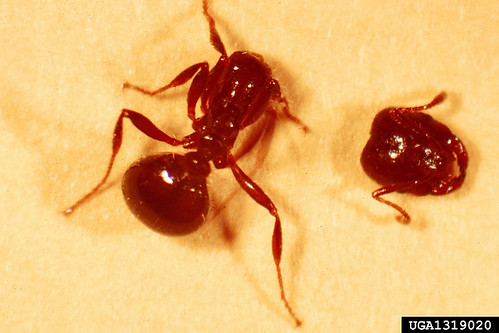 According to the U.S. Department of Agriculture’s Animal and Plant Health Inspection Service, fire ants infest more than 327 million acres in the southern U.S.

There is also an active fire ant quarantine in parts of 14 states and Puerto Rico. In Arkansas, 39 counties fall under the federal red imported fire ant quarantine. Under the quarantine, certain materials like potted plants, grass sod or baled hay that has come into contact with soil can’t be shipped to non-quarantine areas.

Fire ants first entered the U.S. through the port in Mobile, Alabama, around the 1930s. Ships from South America entering the port used fire ant infested soil as ballast. They have been in Arkansas since the 1950s, said Loftin.

There are two species of fire ants residing in Arkansas. The red imported fire ant, Solenopsis invicta Buren, can be found all over the southern half of Arkansas. These ants have a reddish-brown hue and workers can vary in size between an eighth and a quarter of an inch. Black imported fire ants, or Solenopsis richteri Forel, are darker, and Loftin said they are mostly located along the Mississippi River in Arkansas.

These ants can most likely be found in open areas where they can receive a lot of sunlight.

According to Loftin for about a decade the Division of Agriculture, in partnership with APHIS, has released phorid flies to help with the growing fire ant population.

The female flies find a target and injects an egg into the fire ant. After the egg hatches and develops into a larvae, it molts a couple of times and migrates to the ant’s head. There, it releases digestive enzymes that cause the ant’s head to fall off. The larva pupates in the head and stays there until the adult fly emerges.

The impact on the fire ant population doesn't come from the mortality rate caused by the flies, explained Loftin, but by allowing for competition between native and fire ants. When a colony is attacked by the flies, they will forage less creating smaller colonies.

“When the colony size declines, it allows native ants to compete with fire ants for food,” Loftin said. “Eventually, you will see fewer fire ant colonies.”

To take care of fire ant colonies in your own yard, Loftin recommends using fire ant baits that can be purchased at your local hardware or farm supply store.

A general rule of thumb is to wait to bait until mid April, but there are exceptions, said Loftin.

Fire ants must not only be present and active, but also foraging for the bait to work. This generally happens when soil temperatures are above 60 degrees.

Loftin recommends putting some food out, like a hotdog or bologna, and mark where you put it. Check on it after 30 minutes. If it’s swarming with ants, it means they are foraging and the bait will work. If not, wait for some warmer days and try again.

As for home remedies like club soda and grits, Loftin says most don’t work at all and can be harmful to the environment or yourself.

“Most home remedies are ineffective and sometimes illegal,” Loftin said.

For more information about fire ants and how to deal with them visit, https://www.uaex.uada.edu/publications/PDF/FSA-7036.pdf, or contact your local county agent.

=The University of Arkansas System Division of Agriculture offers all its Extension and Research programs and services without regard to race, color, sex, gender identity, sexual orientation, national origin, religion, age, disability, marital or veteran status, genetic information, or any other legally protected status, and is an Affirmative Action/Equal Opportunity Employer.