Research highlights effectiveness of precision agriculture in fight against pests

By Ryan McGeeney
U of A System Division of Agriculture
March 14, 2017

MONTICELLO, Ark. — As Arkansas row crop production has increasingly shifted away from cotton and toward soybeans, and as scouting methods have become better and more heavily used in the popular crop, growers and researchers have begun to zero in on one of the industry’s most persistent pests: the plant pathogenic nematode. 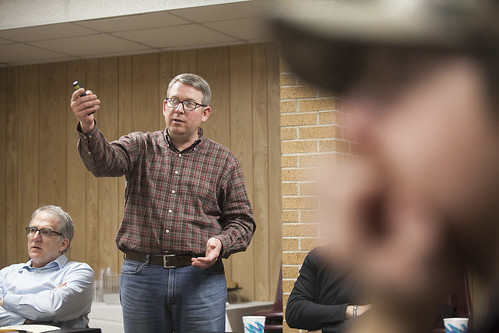 While the assorted species of nematodes — a microscopic roundworm that typically dwells in soil — number in the thousands, one species that most concerns the agricultural industry in Arkansas and the greater Mid-South is the southern root-knot nematode.

Terry Spurlock, extension plant pathologist with the University of Arkansas System Division of Agriculture, said the species can both reduce yield and destroy entire plants by attacking root systems.

“The vast majority of nematodes are either beneficial or inconsequential to our row crops,” Spurlock said. “They feed on other nematodes, bacteria or fungi. But because we’ve done a lot of continuous cropping of cotton or soybeans, and because M. incognita reproduces well on many widely planted varieties of these crops, there’s been a buildup of these particular plant pathogenic nematodes in many fields.”

Sighting in on the enemy

In 2015, researchers including Spurlock and John Rupe, a Professor of Plant Pathology for the Division of Agriculture in Fayetteville, as well as their counterparts at Mississippi State University, Louisiana State University and UA Monticello, applied for and received a $200,000 grant from the U.S. Department of Agriculture to conduct research aimed at determining the benefits of using soybean varieties bred for resistance to the southern root-knot nematode, versus using site-specific nematicide treatments in fields planted with non-resistant varieties or even using a whole-field approach to pesticide application.

Plan B: When the strongest weapon in the arsenal just isn’t available

For decades, one of the most effective tool on the market for controlling the nematode in various crops has been Telone, which is a byproduct of an epoxy used in automobile manufacturing processes.

Telone is a liquid pesticide that gasifies when exposed to open air, and is applied by injecting it into soil beds, propelled from a tank with nitrogen gas. Although widely effective in crops ranging from potatoes in the Pacific Northwest to strawberries in Florida, the fact that it is a byproduct of an unrelated industry creates an unpredictable scarcity, Spurlock said.

“A lot of Telone goes to the far southeast part of the United States for small fruit and vegetable production. In Florida, if they don’t treat with Telone, the nematodes and sandy soil mean there simply won’t be a strawberry crop,” Spurlock said. “If they leave a row untreated, you get nothing but barely-alive strawberry plants. In a 100-foot row, you’re not going to get a handful of edible strawberries. It’s literally the difference between making a crop or not, in examples I’ve seen.”

“We always knew the supply was scarce for row crops in our area,” Spurlock said. “So the best use — still a very good use and objective — is to use Telone as a research tool, to understand if nematode control can be achieved site specifically, as well as to understand how much yield the nematodes are taking from us, and compare to other nematicide products, or resistant and moderately resistant soybean varieties.”

Earlier this month, Spurlock and Rupe met with researchers Tom Allen, of Mississippi State University, and Charlie Overstreet, of Louisiana State University, as well as several Cooperative Extension Service agricultural agents and growers, to review data gleaned from two test plots planted in Arkansas and Louisiana in 2016. The trial location in Mississippi went unplanted due to heavy rains throughout the season.

“The goal of the grant is to see how often it makes sense to apply in spots, versus applying whole-field, with Telone or any other nematicide,” Spurlock said. “We can do that now with our farm technology, and it’s going to get easier with drones and aerial imagery, using near-infrared spectrum analysis and other tools to understand the amount of acreage that is being impacted by nematodes. We’ll be able to assess dollar amounts for individual acres in fields, and whether we’re making any money or not in a given area.”

In light of limited options for chemical control, Spurlock said hehopes to use the team’s research to combat a perception among some growers that planting resistant varieties of soybeans is a losing proposition.

“There’s this idea out there that those varieties just aren’t high-yielding enough to make it worth the expense,” Spurlock said. “That they’re better off just taking their losses to nematodes in isolated areas with a non-resistant, ostensibly higher-yielding variety. But the data doesn’t back that up in many fields I have seen.”

The research team plans to plant additional soybean research plots in 2017 — one each in Mississippi and Louisiana, and two in Arkansas (the fourth plot intended to compensate for the data lost due to the unplanted Mississippi plot in 2016). Spurlock said that although the use of Telone may be becoming increasingly hypothetical because of its scarcity, its use as a research tool remains valuable because it can help identify the severity of nematode pressure.

“The best pest management scenario is never just one approach — it should always be sound, integrated pest management,” Spurlock said. “Choose the best variety, knowing as many of the problems as possible, and cover as many bases as possible before planting the seed.”