By Ryan McGeeney
U of A System Division of Agriculture
March 7, 2017

LITTLE ROCK — What started as a young 4-H member’s scare from a family car accident has turned into a law that gives Arkansas residents the legal framework to ask their local school districts to require seat belts on school buses purchased after 2018. 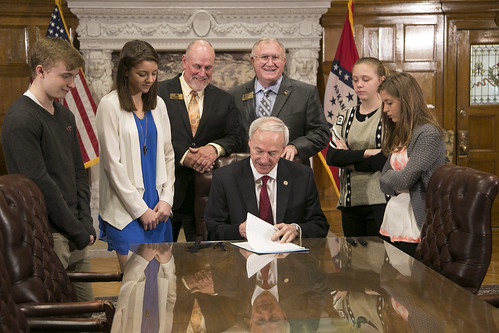 “I was talking with our 4-H leader about a car wreck my mom and I had been in,” Alder said. “When I had my wreck, it scared me, and I want other kids to be safe and not get hurt as bad as I did.”

Alder, who was in fifth grade at the time, prepared a report examining the number of fatalities associated with wrecks involving school buses, many of which do not have seat belts for individual passengers. Jane Newton, a Lincoln County extension agent for the University of Arkansas System Division of Agriculture, said she encouraged Alder to present the report to McElroy, who has been the longtime auctioneer at the county’s Cattleman’s Pie Auction.

“I thought, ‘how cute,’ until she got really serious, and I found out she had done her homework,” McElroy said.

“That started about two and a half years ago,” he said. “In that time period, there have been several deadly bus crashes in this region alone. One in Houston, involving a rollover, and one in Chattanooga that was devastating.”

Under the new law, residents can petition their local school board to determine how much of a millage increase would be required to afford the addition of passenger seat belts to newly-purchased school buses, and to put that millage increase to a vote in the next regularly-scheduled election.

“Local control was really the only way to fund this,” McElroy said. “This lets the people decide — the people who put their kids on the bus every day can decide if that’s something they want to pay for.”

McElroy said the addition of seat belts to a school bus can increase the cost of the bus by about $7,000 to $10,000. Although federal law requires smaller school buses, those weighing less than 10,000 pounds, to feature lap belts, any requirements for belts on larger buses is left up to state and local legislation, according to the National Highway Traffic Safety Administration.

For more information on how to get involved with 4-H or other University of Arkansas System Division of Agriculture programs, contact your local Cooperative Extension Service agent or visit www.uaex.uada.edu.