By Ryan McGeeney
U of A System Division of Agriculture
March 3, 2017

FAYETTEVILLE, Ark. — While much of the research conducted by the men and women of the University of Arkansas System Division of Agriculture plays out on the macro level — crops in the field, food on the table — scientists at the Division are also working at the micro level: pursuing the scientific underpinnings of agriculture, finding solutions to some of the biggest problems facing the state’s producers. 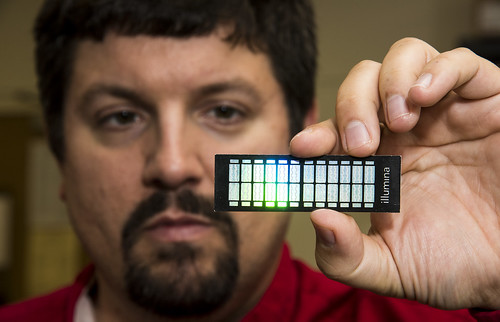 James Koltes, Assistant Professor of Animal Science with the Division of Agriculture at U of A Fayetteville, has spent years studying the effects of environment on cattle, particularly the stresses of heat and toxicity.

In July 2015, Koltes joined the Division of Agriculture, teaching at UA Fayetteville and working with the Arkansas Agricultural Experiment Station in Batesville to study genetic markers in cattle affected by heat stress and fescue toxicosis, a syndrome that affects ruminants that feed on fescue grass carrying a common fungus.

“The toxin stress and heat stress kind of go hand-in-hand,” Koltes said. “It’s a strange thing. In the winter months, when we get cold weather, there’s an aspect of cold weather stress that brings on problems with this toxin, too, but for the most part, it’s a hot weather problem. In Arkansas, we’ve got heat and humidity — there’s just an opportunity for research here, to look at something that affects us, our cattle, and it’s something we have an advantage in.”

Fescue grass was originally transplanted to Arkansas from Kentucky, in part because of its tolerance to heat and drought, as well as its capacity for effective erosion control. But the same thing that makes fescue such a stout candidate for withstanding Arkansas summers — a symbiotic fungus that grows with the grass — can also breed mycotoxins that can cause weight loss or an inability to shed a winter coat in cattle.

“With the toxicosis, they lose weight, they have poor reproductive capacity, they can have general health problems and get sick more easily,” Koltes said. “In bad cases, they can lose the tips of their tails, tips of their ears in cold weather. ‘Fescue foot’ is a nasty thing where they actually lose their hoof. Anything we can do to prevent that would really help.”

John Jennings, extension forage specialist for the Division of Agriculture, said that of the estimated two million acres of fescue in Arkansas, more than 90 percent of fields are the toxic KY-31 variety.

“Fescue is the dominant forage variety in the northern half of Arkansas,” Jennings said. He said that it’s less present in the southern half of the state, although significant acreage exists in southwestern Arkansas and in upland counties including Pike and Polk.

Because fescue is such a prolific grass, well suited for the Arkansas climate, replacing it on a large scale is somewhat impractical, Koltes said.

“It takes about 18 months to replace fescue with, say, Bermuda grass, using a ‘spray/smother/spray’ approach,” he said. “And Bermuda doesn’t have near the nutrient profile of fescue. The only agronomic solutions that have really come up require an awful lot of management and are high-maintenance. There is also a non-toxic type of fescue grass. Competitively, it doesn’t always stand up as well as the toxic version. And it’s very expensive.”

Koltes said growers and researchers have historically tried treating cattle with toxin blocking agents, but to little success. The best solution, he said, has been to breed fescue grass to grow with a symbiotic fungus that doesn’t produce the mycotoxins that the toxic version does.

“The trick is to grow this grass with the advantage of this fungus, that gives it heat and drought stress resistance, but doesn’t produce this nasty toxin profile — and then to get it to stand up against the toxic fescue, because it’s everywhere,” he said.

In March and late August of 2016, Koltes and his research team gathered fecal, nasal and vaginal samples from about 100 cows at the Batesville Station, and have been analyzing the samples in the months since, isolating bacterial DNA profiles and beginning statistical analysis of cattle at the station, all in an effort to identify factors common to cattle who more significantly impacted by the toxicosis than others, and to create a method of determining whether the syndrome is getting better or worse in a specific animal.

“We have some really difficult-to-measure traits that help tell us if animals have been stressed on toxic fescue, but they’re sort of ‘yes/no’ answers,” Koltes said. “They don’t tell us if animals are moving towards being stressed, or if they’re recovering. So a lot of what we’re trying to do is develop measurements that more accurately assess the degree of impact from the toxin or the heat. Being able to identify the quantity of certain microbes may help to tell us that.”

Koltes’s team is also collaborating with the University of Missouri on another aspect of the study, aimed at identifying differences in animals that may influence how they shed their hair, in order to identify toxin exposure through shedding rates.

“What we’d like to do is develop a routine genetic analysis, so that anyone dealing with toxic fescue could potentially use it to predict which animals would be more productive on toxic fescue,” Koltes said.

To learn more about research at the Division of Agriculture, contact your local Cooperative Extension Service Agent or visit www.uaex.uada.edu.