At Pigposium 3, weed scientists urge growers to get off the ‘resistance treadmill’
skip to main content
News - 2017

At Pigposium 3, weed scientists urge growers to get off the ‘resistance treadmill’

FORREST CITY, Ark. – Finding ways to halt the “resistance treadmill” was a key message from weed scientists on Tuesday at Pigposium III, a daylong event hosted by the University of Arkansas System Division of Agriculture focused on herbicide resistant Palmer amaranth. 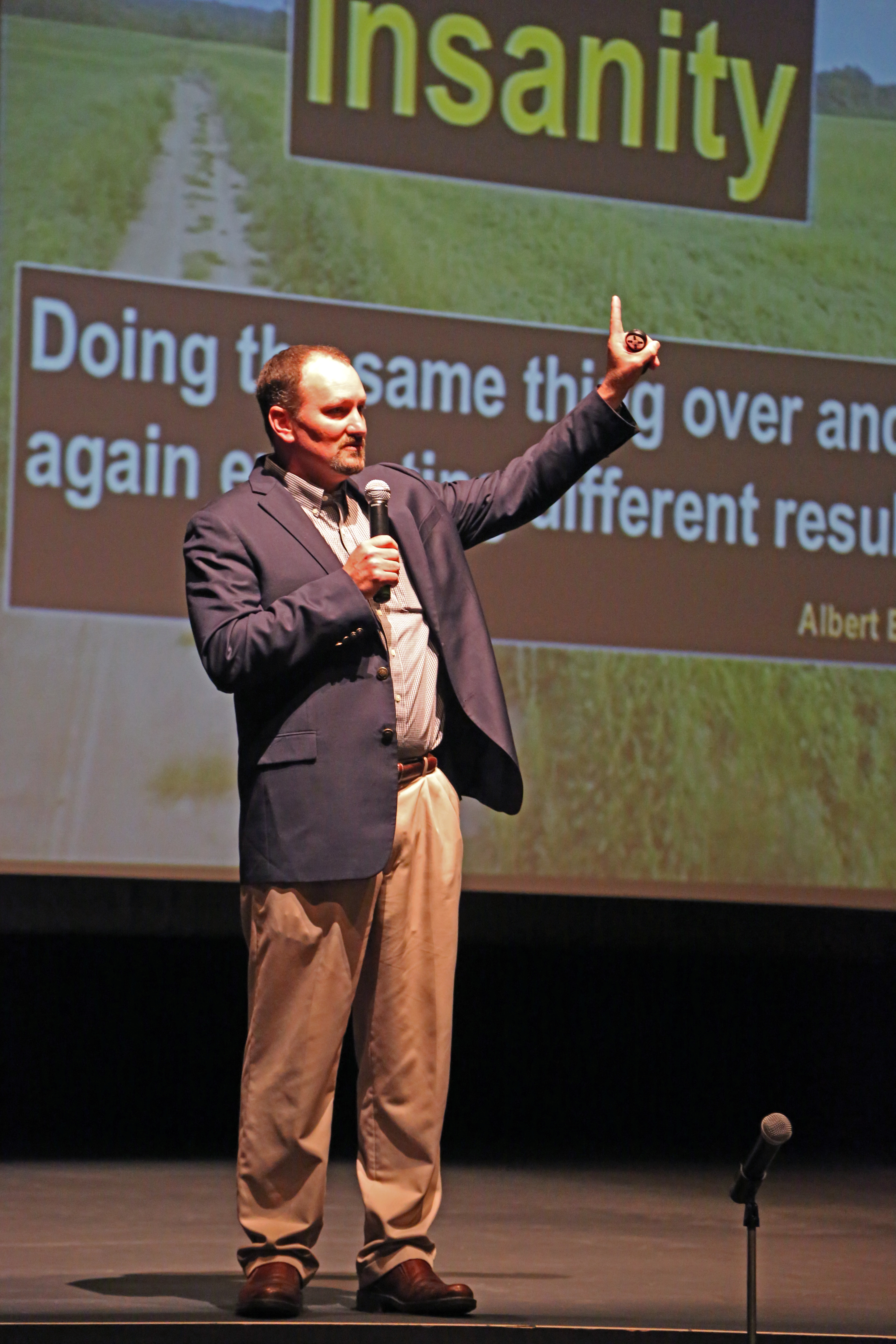 About 300 from the agriculture industry, including farmers, extension agents and consultants, heard weed scientists from four states describe research and strategies for managing weeds that have developed resistance to the most-used herbicides.

Jason Norsworthy, weed scientist with the University of Arkansas System Division of Agriculture, opened with a situation report, noting that it’s been 12 years since the existence of glyphosate-resistant Palmer amaranth, better known as pigweed, was first confirmed in Georgia.

A year later, in 2006, glyphosate-resistant pigweed was confirmed in Arkansas and Tennessee.

In just over a decade, “31 states now have glyphosate-resistant Palmer amaranth,” he said. “The world’s greatest herbicide is no longer effective against pigweed.”

“If we follow our resistance pattern … we’re just going to add dicamba to the growing list of resistance that we have,” he said. “We’ve proved this in a laboratory study.”

This pattern, this treadmill, will eventually lead the industry to “multiple stacked resistance,” Scott said. “I’m a weed scientist and that scares me. Stacked resistance is a game changer.”

Scott’s comments were echoed by fellow Division of Agriculture Weed Scientist Tom Barber: “if you continue to rely just on PPOs, you’ll shift the population in that field to PPO resistance.”

Norsworthy, in talking about the future of herbicide use said, “it’s just a matter of time before we have a six-way stack” in herbicide resistance.

He quoted Eric Maupin, a Tennessee farmer who is a board member of the American Soybean Association, saying “going into 2016, I have one post-emergence option for pigweed and if I were to lose that option, I wouldn’t be farming soybean.”

“That,” Norsworthy said, “is a very sobering statement.”

“Narrow windrow burning was quite effective, with complete control of all weed seed. We killed every weed seed in that row,” he said. Another option were seed destructors that used mills to crush seed. “This gets me excited. It lessens the seed going back into the soil.”

Larry Steckel, a Tennessee Extension weed scientist, talked about the use of cover crops.

He said he is often asked if cover crops are effective in managing resistant weeds. “Yes,” he said, with a pause. “How much time to I have left?”

Steckel said cover crops are highly effective, but “not a silver bullet” but added that using them would likely reduce by one, the number of herbicide applications, needed by growers.

Michael Popp, an agricultural economist with the University of Arkansas System Division of Agriculture, walked the audience through Palmer amaranth manager, or PAM, a PC-based program that enables growers to develop their own strategy in managing pigweed. The software is available at https://uaex.uada.edu/farm-ranch/crops-commercial-horticulture/palmer-amaranth-management-model.aspx.

Kevin Bradley, a Missouri Extension weed scientist, discussed the issues with dicamba in his state. He said that farmers with crops injured by dicamba, didn’t want to turn other farmers in, so the reported damage might not have been the whole story.

Bradley said the state’s legislature was pondering a bill to fine growers $1,000 an acre for illegal applications.

Pecan, peach, white and red oaks proved to be very sensitive to dicamba and Bradley said he expected that “homeowners, with half their trees defoliated, will figure this out.”

Ples Spradley, extension pesticide assessment coordinator for the University of Arkansas System Division of Agriculture announced where growers can find an online course that’s required for use of Enlist Duo and Engenia herbicides in Arkansas. (See: https://www.uaex.uada.edu/media-resources/news/2017/march2017/03-01-2017-Ark-Engenia-Enlist-Duo-Course.aspx )

Jason Davis, application technologist, emphasized that droplet and nozzle size matter when applying herbicides. Producers need to find the right balance between trying to ensure the herbicide goes just where the applicator needs it, and a droplet size that will ensure the herbicide’s efficacy.

Pigposium wound up with three producers sharing their experience with various weed management methods. Harry Stephens of Helena talked about his successful use of narrow windrow burning and how a relatively small investment paid large dividends.

Dane Coomer of Piggott, told the audience about his experience with Zero Tolerance in cotton.

Adam Chappell, a producer at Cotton Plant, talked about successful use of cover crops, telling the audience he’d been using the same beds since 2010. He pointed to a list of weed management tactics in his Powerpoint presentation, saying “prayer is the only thing up there that’s free.”

For more information about weed management, contact your county extension office or visit www.uaex.uada.edu or http://Arkansascrops.com.