LITTLE ROCK – As anyone with a hand in the U.S. cattle business will tell you, fescue grass is one of the primary pillars of the industry, with approximately 2 million acres of the cool season grass grown by cattle producers in Arkansas alone. 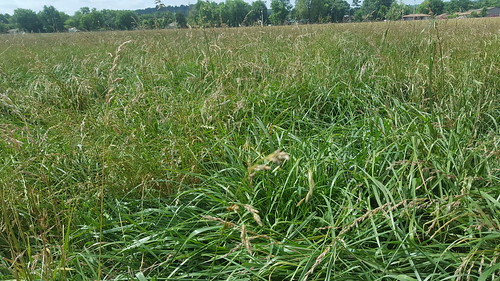 The older versions of KY-31, a variety of fescue introduced to Arkansas in the first half of the 20th century for its tolerance to heat stress — and, unfortunately, commonly associated with fescue toxicosis — often make it through summers unscathed. But for farmers who have invested in newer, non-toxic novel-endophyte types (NE+), a bit more management is involved, said Dirk Philipp, Associate Professor of Forages for the University of Arkansas System Division of Agriculture.

“Fescue, in general, is a robust forage and will shut down growth when summer temperatures get really hot and rainfall is scarce,” Philipp said. “The time of slowed summer growth is hard to predict, and mostly depends on the length of a dry spell.”

Philipp said fescue has a “growth curve,” with much growth occurring in spring, and very little in the summer. The grass should be managed according to the season, he said, rather than taking a cookie-cutter approach to pastures.

He noted that the newer novel-endophyte grasses are nearly as resilient and long-lasting as the old toxic KY-31 grasses.

“We have had them on our research farm for several years now, and never run into problems from heavily stocking them,” he said. “The key is to understand what makes grasses grow after a hay cut or a grazing, which is the photosynthetically active leave tissue — the green leaves. It’s not like in legumes, where regrowth is initiated from root reserves.”

This means that after each grazing, there needs to be leave area left on the plant for good regrowth, Philippp said. This becomes more crucial as the summer months approach, and as the environmental stress on fescue pastures increases. With diminished leave area, root growth and renewal is diminished as well.

Philipp suggests a few general rules for managing these grasses: