By Mary Hightower
U of A System Division of Agriculture
June 30, 2017

STUTTGART, Ark. – Arkansas crop producers are being encouraged to be in scouting mode as the number of incidents of rice diseases and some insect pests rise. 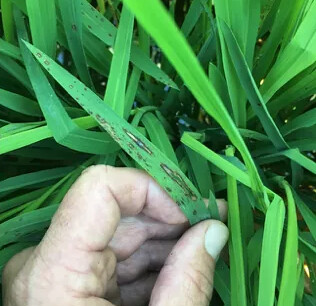 Traps set by extension personnel as bellwethers for crop pest populations have seen high numbers in some areas.

“We are seeing a big jump in southwestern corn borer trap catches, particularly in the area around Brinkley and Wheatley,” said Glenn Studebaker, extension entomologist for the University of Arkansas System Division of Agriculture. “One trap hit more than 1,000 moths for a single week.”

Studebaker said the threshold to begin treating southwestern corn for borers is 100 moths per trap per week. Once hatched, corn borer caterpillars feed on leaves for a few days before burrowing into the cornstalk. At that point, “an insecticide application will not control them.”

For recommended application, see: http://www.arkansas-crops.com/2017/06/26/southwestern-borer-update/ or contact your county agents.

Yeshi Wamishe, extension plant pathologist with the U of A System Division of Agriculture, said she’s received reports of sheath blight in rice and now is a good time to be scouting for rice blast.

Because managing rice diseases can be an expensive proposition, Wamishe recommends scouting and planning ahead to minimize any losses to disease.

“Remember, fungicides are most beneficial in well managed fields,” she said. “If you’ve planted a blast susceptible variety in an historically blast-prone field, you need to plan ahead for fungicide protection. The same is true for false smut or kernel smut.

“Timing is everything,” she said. For more information on fungicide timing for selected rice diseases, see: http://bit.ly/2srinQz or contact your county extension office.