By Meleah Perez
U of A System Division of Agriculture
June 23, 2017

FAYETTEVILLE, Ark. — An extensive blackberry demonstration effort is stretching across Arkansas to include 17 extension agents. 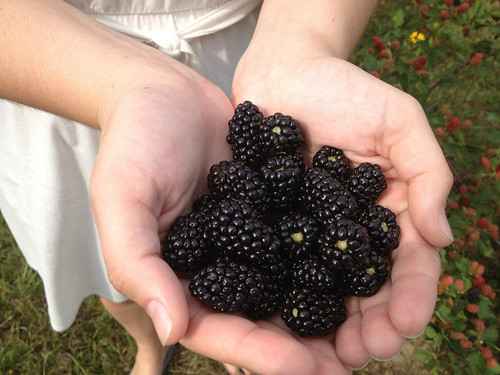 University of Arkansas System Division of Agriculture Cooperative Extension Service agents are setting up plots now through fall of around 9-12 blackberry plants in all four corners of the state and everywhere in between to show the public the best methods for blackberry production, said Amanda McWhirt, extension horticulture specialist for the Division of Agriculture. Demonstration activities will begin later in the fall or next spring.

The demonstrations will display adapted varieties, irrigation practices, trellising, mulching and pest management. Some demonstrations will be at Cooperative Extension Service offices, schools and community gardens. The plots will replicate how plants are grown on large acreages, but on a smaller scale to allow hands-on experience for the participants.

McWhirt said the idea evolved from Blackberry School, a class she teaches with Jackie Lee, a horticulture extension specialist with the Division of Agriculture. The class, which meets four times a year in Clarksville, aims to teach the basics of commercial blackberry production.

The class got good feedback, but people who couldn’t travel to Clarksville for the class, were interested in growing blackberries both commercially and in their home gardens, McWhirt said.

McWhirt spoke with county agents, and they thought of a plan to show blackberry production was possible in all regions of the state.

The staff at the Fruit Research Station in Clarksville helped raise the blackberry transplants, which are small plants that people can plant to establish an orchard, McWhirt said.

“I think very often people learn best by seeing things happen,” McWhirt said. “Our county agents have a lot of knowledge, but sometimes it is easier to show someone something rather than to just tell them.”

Jesse Taylor, a student of the Blackberry School and the Division of Agriculture Franklin County Extension Agent staff chair, volunteered for the blackberry demos.

Taylor said he has been interested in blackberry planting since he learned about the work of the Division of Agriculture Fruit Research Station, which breeds blackberries.

“We’ve made it to where you can pick a 5-gallon bucket in your backyard,” he said. “It’s a rewarding crop.”

Blackberries do not require a lot of manual labor, so it would be easy for homeowners to grow them, Taylor said.

There is an increasing demand for locally grown fruits, and the state is well adapted to supplying blackberries to local markets, she said. The demos use varieties that were developed in Arkansas and are well adapted for Arkansas climate and soils.

“The availability of the plants, especially University of Arkansas-developed varieties, was very enticing,” said Brian See, agricultural agent with the Marion County Cooperative Extension Service, regarding his decision to participate.

He said the demos will be beneficial to him because he can continually inform home gardeners and clients and showcase University of Arkansas varieties.

“In my eight years as a county agent, I have not seen a demonstration like this replicated throughout the state at one time,” See said.