By Ryan McGeeney
U of A System Division of Agriculture
June 20, 2017

LITTLE ROCK – Of all the hazards a tree lover in Arkansas must endure, the occasional wasp gall or fungal infection among the leaves of his or her favorite oak tree might be the least worrisome. 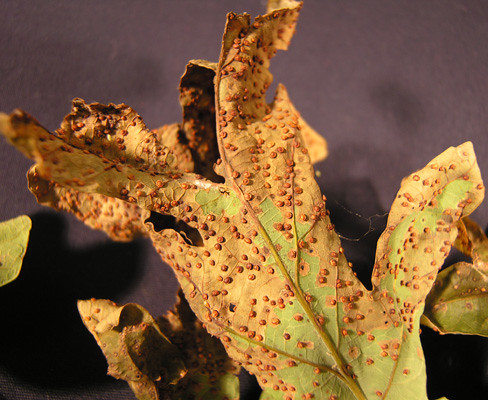 Which isn’t to say they aren’t a little unpleasant to look at.

Jon Barry, extension forester for the University of Arkansas System Division of Agriculture, said that two seasonal syndromes common to oak trees in the Arkansas summer, jumping oak gall and oak anthracnose, have begun to rear their heads in certain areas of the state.

“In the grand scheme of things, neither of these are that bad,” Barry said. “They’re just ugly.”

The first, jumping oak gall, is caused by Neuroterus saltatorius, one of about 250 species of gall wasps found on oak, he said. The gall — typically a series of small, scab-like cysts that cover the leaves — serves as an incubator for the tiny, stingerless gall wasp larvae, which are deposited in the early spring.

Barry said that many times, an accumulation of galls will cause leaves to prematurely brown, but the syndrome is seldom aggressive enough to harm the tree itself.

Jumping oak gall is so named because as the larvae matures inside the gall, their active movements can cause a fallen gall to actually move or “jump,” not unlike the phenomenon of “Mexican jumping beans,” Barry said.

Barry said there is no broadly-recommended treatment for jumping oak gall.

“With a small tree, you could spray insecticide on the tree, but I don’t know that it could penetrate the gall to get to the larvae,” he said. “With a big tree, it’s just not practical to try to spray all the leaves. Either way, the tree is typically going to be just fine.”

The other syndrome currently making an appearance in oak trees in the state is oak anthracnose, a fungal infection that thrives during cool, wet springs such as the one much of Arkansas has enjoyed the past few months.

“Fungi love moist environments, so in a cool, wet spring, we get all kinds of fungal problems showing up, and oak anthracnose is one of them” Barry said. “It infects the leaves — it can kill the leaves, it can defoliate the tree if it gets to be a serious problem, but it normally only does that once in a summer. So although it can set the growth of a tree back a little bit, it’s very rare that it kills a tree.”

One of the primary recommendations for controlling oak anthracnose is to gather fallen leaves and twigs in the fall and burn them, Barry said. The fungus overwinters in the leaf litter, and spores later splashes up onto the live leaves of low-hanging branches during the rains of the following spring.

Sherrie Smith, Arkansas state plant disease diagnostician and plant pathologist for the Division of Agriculture’s Cooperative Extension Service, said her office has begun to receive reports of the two syndromes in various areas of the state, including Benton, Washington and Pulaski counties.

“It’s a little too early to tell,” Smith said. “We’re just now through the first half of June. People won’t know until it’s worse.”

Chandler Barton, Forest Health Specialist with the Arkansas Forestry Commission, said the gall wasp, which is a native insect, can periodically increase to outbreak levels when conditions are right and its abundance will likely subside in following years.

“The western Boston Mountains had a similar outbreak in 2015,” Barton said. “Southern Missouri had issues in 2016. And now we have this outbreak in 2017.”

Smith routinely receives diseased plant samples from Cooperative Extension Service agents from counties throughout the state. When she diagnoses a diseased plant, the report she generates goes both to the submitting agent and to the state’s plant disease database, which helps track and record incidences throughout Arkansas.

“Most of the calls I’ve received have been from folks who have seen it from the highway,” he said. “The bulk of the severely affected area is near the Bobby Hopper Tunnel on I-49 and eastward. I can’t say for certain how far east into the Ozarks the issue can be found, but I believe that I was able to map the worst of it.

“The trees that look the worst are defoliating some of their crowns and look awfully thin,” he said. “They appear dull brown from a distance. Up close you can see some green on the leaves, but the distal portions of the leaves are browned from the galls and/or curled and browned from anthracnose. Jumping oak gall only affects white oak and the anthracnose can be on other species of oak, but it tends to affect white oak more.”

In terms of the spread, Barton said the worst appears to be over.

“Due to the biology and life-cycles of the gall and anthracnose, neither will cause more damage for the rest of the year,” he said. “Next spring the cycle could repeat if conditions are right.”

Barton said his official report, along with maps and images, should be available to the public soon.