By Ryan McGeeney
U of A System Division of Agriculture
June 16, 2017

JONESBORO, Ark. — While their workdays are dedicated to studying the kinds of insects most Arkansas growers dread — pests that rob crops of their nutrients and producers of their yields — entomologists with the University of Arkansas System Division of Agriculture do occasionally find time to work with some of the more beautiful beneficial creatures of the insect world. 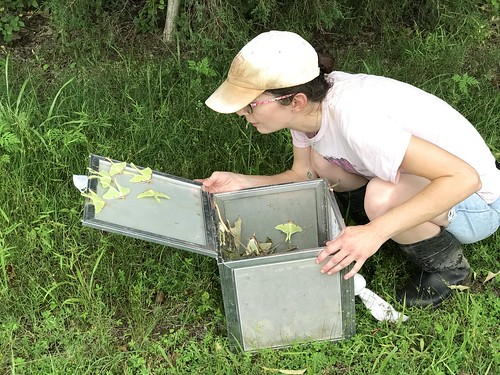 Earlier this month, Laura Starkus, an entomologist and lab technician working with Division of Agriculture researchers, released more than 100 luna moths — raised from eggs she had nurtured over the winter — into a pasture inv northeast Arkansas near Jonesboro.

“This is the first year I’ve raised this species, this family of the silkworm moths. They’re about the biggest moths we have in Arkansas,” Starkus said.

Last September, Starkus received a pregnant female moth that appeared to be at the end of its lifespan, Starkus said. The moth laid about 200 eggs before it died.

“We raised them from the time they hatched to caterpillar stage,” she said. In October, when the caterpillars would typically enter their cocoon stage, Starkus placed the cocoons in a laboratory refrigerator for the duration of the winter and spring.

“Now that the weather’s warmed up, there are trees for them to oviposit on, we’ve been releasing them into a pasture, where I keep my horse,” Starkus said. “It’s an undisturbed habitat with a good food source for them.”

The luna moth (Actius luna), with its luminescent green wings and a span of about 3-5 inches, the moth is visually striking by any definition. The moth is native to Arkansas, although seeing one throughout the southern plains has become somewhat rare, said Tanja McKay, an Associate Professor of Entomology at ASU and a research scientist for the Division of Agriculture.

“Due to urbanization, we don’t see these things as often as we might have 10 or 20 years ago,” McKay said. “And so with just a little bit of effort, releasing these moths might help increase the population within the area. Doing something like this might help that particular species by giving more of a jumpstart into the summer.” 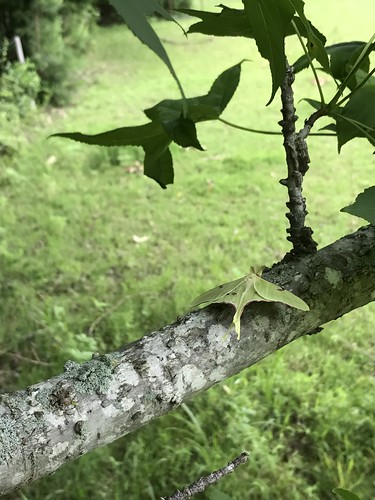 “These guys aren’t a pest in Arkansas,” Starkus said. “They feed on leaves of sweetgum and persimmon. If you had a high enough number of caterpillars, they could do damage to a tree, but they tend to get eaten by a lot of other things, because they’re a native species.”

Starkus said there are other silk worms, introduced to the United States from Asia for the purpose of silk manufacturing, that could potentially become pests, because they lack a predator complex in North America. But because their numbers are so small, they’ve remained unestablished in the wild.

While Starkus referred the release of the luna moths as the belonging to the “hobby” side of her entomological interests, the moth’s use of pheromones does tie into her actual research.

“These moths can migrate long distances, using pheromones to find each other,” she said.  “The females likely pick up a cue from the tree they’re going to lay eggs on — so they will probably stay in that area. But males will travel miles and miles if necessary.

“Similarly, in some of the rice mills we work with, we’ll put out lures that are baited with the pheromone in an effort to reduce moths that are pests,” she said. “If you put enough pheromone in a confined space, the males can’t find the females, and it’ll slow down the breeding process, which will help you control your numbers a little bit. It won’t stop the females from flying, and it won’t affect the caterpillars at all, but it will slow down the breeding.”

To learn about entomological research at the Division of Agriculture, contact your local Cooperative Extension Service agent or visit www.uaex.uada.edu.