By Meleah Perez
U of A System Division of Agriculture
June 12, 2017

FAYETTEVILLE, Ark. — A two-woman mission to teach sewing in one of the world’s least developed countries has brought benefits far beyond making clothing for the five Malawi mothers and in-house seamstress who were their students. 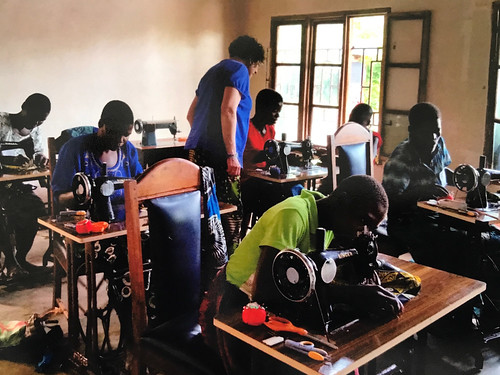 Candes Wilson and Glenda Samuels, both members of the Bethel Grove Extension Homemakers Council, volunteered to travel to Africa for 10 days in March 2016 when Wilson’s daughter-in-law, Catherine, told them about the need for sewing skills, which would turn into profit for the five mothers and in-house seamstress that would come to participate in the program.

Bethel Grove is a branch of the Arkansas Extension Homemakers Council, which aims to help individuals through education, leadership development and community service. The African mission was an international departure for AEHC, which has more than a century of experience helping neighbors and communities in Arkansas.

Since its establishment in 1912, EHC’s legacy communities includes aiding victims of the 1927 Great Flood, growing Victory Gardens during World War II, in the 1980s, being part of a statewide education encouraging Arkansans to have their children vaccinated to prevent serious illnesses.

Wilson also asked her church group to help her buy supplies for sewing like scissors, pins and seam rippers, among other materials.

“I collected enough that I gave David and Catherine the money to buy all those ladies sewing machines,” Wilson said.

While Wilson and Samuels jump started the training in the first 10 days, the entire program was six months, Wilson said. The women got their sewing machines after completing the program, and they also got sewing kits to continue their craft.

The women participated in the program three days a week, despite the challenges of raising multiple children and having no means of transportation other than walking the miles to the orphanage.

Wilson and Samuels taught the women and the in-house seamstress how to sew backpacks, outfits and aprons, while using every spare piece of fabric available.

The women who learned from Wilson and Samuels had little to no previous knowledge about sewing. But the EHC members remained patient as they taught the women and got a feel for another country’s culture.

Wilson and Samuels ate meals characteristic to what the Malawians were familiar to, and the two also slept in two twin-sized beds in an 8-by-8 room that used to be the orphanage’s dining room.

“They are so happy with what little they have,” Samuels said. “It’s things we take for granted.”

The orphanage houses eight children, 80 orphans who live with extended family in nearby villages and 75 widows, according to the Pure Mission website.

Malawi is among the poorest countries in the world in terms of gross domestic product per capita, according to the CIA World Factbook.

Despite poverty, this program has a ripple effect from the women to their children.

“I love to watch people feel good about what they did,” Wilson said.

AEHC is operated by the Cooperative Extension Service, part of the University of Arkansas System Division of Agriculture.