By Fred Miller
U of A System Division of Agriculture
June 9, 2017

(674 words)
(Download a MS Word version of this story here.)

FAYETTEVILLE, Ark. — University of Arkansas System Division of Agriculture scientists have identified a rose genotype that resists infection by the rose rosette virus, a pathogen that disfigures and kills rose plants. 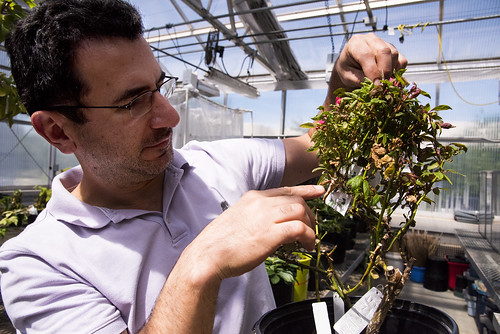 “Genotype” refers to the genetic code of an organism, and identifying this particular variation is an important first step in developing new rose varieties with resistance to the disease, said Ioannis Tzanetakis, associate professor of plant pathology.

Alma Laney and Patrick Di Bello, graduate students in Tzanetakis’ laboratory, discovered the virus, developed sensitive detection tests and proved that the rosette virus is the sole causal agent of the disease.

Since then, Tzanetakis said, researchers at other institutions have built on Tzanetakis’ work to develop even more sensitive tests.

The discovery of the virus and development of the diagnostic tests have been breakthroughs for the ornamental plant industry, Tzanetakis said. Commercial plant propagators can screen for the virus and destroy plants that have the disease before it can spread to healthy rose plants.

More recently, Tzanetakis, Di Bello and post-doctoral research associates have been pursuing resistance to the disease. They found one rose genotype out of many that didn’t get sick when infected with the virus, Tzanetakis said.

“Under greenhouse conditions,” he said, “it cannot be infected.”

Traditionally, some gardeners cut off branches with disease symptoms, believing that would keep the virus from spreading to other parts of the plant. But Tzanetakis said a simple test showed the virus was present in the roots of an infected plant. “So, pruning doesn’t necessarily remove the disease,” he said.

The discovery of a resistant genotype offers a more effective defense against infection and provides a good starting point to breed resistance against the virus in popular varieties, Tzanetakis said.

“Stable resistance is the best line of defense,” he said.

Knowing the rose has resistance is just the beginning. Tzanetakis said they don’t know where the resistance is located in the plant’s genetic code. Also, because viruses change to adapt to changing conditions, resistance must continually be sought out by plant breeders.

“It’s a good thing to look for,” Tzanetakis said. “But it’s hard work.”

To learn how the disease spreads, Tzanetakis and his research team looked at mites. Rose rosette virus is one of a group of viruses that is known or suspected to be transmitted by mites.

Tobiasz Druciarek, a post-doctoral researcher on Tzanetakis’ team, is an acarologist — a specialist in mites. He provided evidence that the virus replicates inside the vector, a disease transmitter, called Phyllocoptes fructiphilus.

That means that once the mite has picked up the disease, it will continue to transmit it indefinitely whenever it feeds on a rose plant.

Tzanetakis said previouse research from West Virginia has shown that infected roses have an average of 17 times more mites on them than uninfected plants. This suggests that the virus knocks down the plant’s natural defenses, allowing the mites to flourish.

It takes five days once an infected mite begins feeding on a plant until the plant becomes infected with the virus,Tzanetakis said.

“This offers a window of opportunity to eradicate the mites before infection begins,” Tzanetakis said.

The mites are microscopic and cannot be seen with the naked eye. But the mite hides on the plant under the sockets where leaves are attached to the stems. Knowing where to look means plants can be tested for the mites’ presence.

None of the plants in their tests had resistance to the mite, Tzanetakis said. Even the plant that resisted the virus sustained a good mite population.

“This supports the idea that resistance to rose rosette virus is on the molecular (DNA) level,” Tzanetakis said.