Wrestling, jazz and poetry: How cultural collision built a community

Wrestling, jazz and poetry: How cultural collision built a community

LITTLE ROCK – Professional wrestling and poetry. Pasta making and punk rock. Not only do opposites attract, but in Des Moines, Iowa, they also became the catalyst for a cultural awakening. 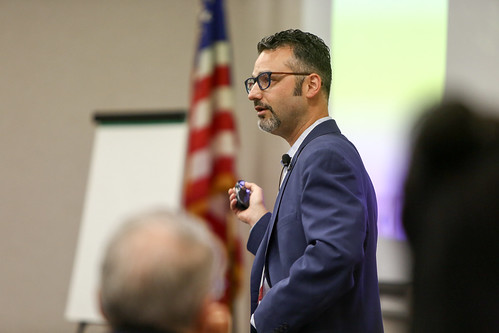 RE-IMAGINING — Zachary Mannheimer, principal community designer for McClure Engineering Inc., talks about transforming communities and his experiences in the cultural explosion that was the Des Moines Social Club. Taken June 8, 2017. (U of A System Division of Agriculture photo by Kerry Rodtnick)

Zachary Mannheimer, principal community planner with McClure Engineering Co., of Clive, Iowa, helped engineer that change as founder of the Des Moines Social Club. He was the keynote speaker at the June 8 Breakthrough Solutions Conference, “Re-imagining Your Community/Region in the 21st Century Economy.”

Breakthrough Solutions is a program of the Community and Economic Development arm of the Cooperative Extension Service, itself part of the University of Arkansas System Division of Agriculture.

That wrestling and poetry would occupy the same Art Deco firehouse at the same time was serendipitous. They came together only because they had money to rent space, money needed to further transform the building.

What resulted over the months was that “we have natural collisions of people who would never otherwise associate with each other,” Mannheimer said. “We had two different events that brought them down and they began to form a community.”

“And we stood back and said, ‘This is it. How do we replicate this’?” he asked.

The Social Club began holding events to “try to attract as opposite crowds as possible.” Pairings included pasta-making and punk bands on one day or Shakespeare and a hip-hop concert.

The opposites attract philosophy seemed to work in drawing diverse people to the venue.

“We had two parents run into their teen-age children. Both sides were equally embarrassed,” Mannheimer said to laughter.

That formula worked so well, “Politico” magazine wrote that over the last decade and a half, “Des Moines has transformed into one of the richest, most vibrant, and yes, hip cities in the country … Its downtown – previously desolate after 5 p.m. – has come alive, with 10,000 new residents and a bevy of nationally recognized restaurants.”

In his presentation, Mannheimer showed examples of other rural communities seeking similar transformations.

He told the conference that the old model of community development – throwing out tax incentives to attract companies to bring jobs – was a zero-sum game. Neighboring towns or states could give similar incentives, but this didn’t solve the basic problem of where to house workers or address workforce development. Companies want talent, but the place where they are centered has to be able to attract talent.

“We love to incentivize companies. Why don’t we incentivize people?” Mannheimer asked. He pointed to Newton, Iowa, where for anyone building a home worth more than $160,000, the city would give the homebuyer $10,000 for a down payment or other use, a year’s worth of tickets to the local speedway, local memberships and a lawnmower.

One target audience are young people now living on the coasts who are looking for new, less expensive places to live and raise families. He also noted that in10-20 years, Little Rock could be a mecca for those coastal migrants and in 20-30 years, Conway could too – if these communities develop the unique amenities they’re wanting.

When it comes to transforming a community, “the rules for success have changed. It’s global, it’s digital, it’s fast,” said Mark Peterson, professor-Community Development, with the Division of Agriculture. Peterson is the architect of the Breakthrough Solutions program, in which communities examine their assets and figure out how best to use them for the betterment of the community.

“We’re now in an experience economy where people have shifted from passive consumption to active participation,” Peterson said. “Instead of just having things where people can see them, like maybe a museum, there’s more interest in activities in your community.”

“Ninety-one percent of our population uses the Internet. To build a billboard on the interstate is expensive. To build one on the internet is free. Trip Advisor is free. You can have a dialog with people who live all over the world about your community,” Peterson said. “If you’re not on the internet in the 21st century, you don’t exist.”

Changing a community starts with communication – encouraging neighbors to think about the future, he said.

“When you change the conversation, ultimately it ends up in changing the community and the physical infrastructure,” Peterson said. “Vision and action creates buzz, which attracts investment business. We have seen this over and over. In Harrison, this has led to over 40 new business coming into its CORE district.”

CORE is Harrison’s Breakthrough Solutions group, the Central Organization for the Revitalization and Enhancement.

According to Peterson, the keys to community re-imagining are:

Breakthrough Solutions is program of the University of Arkansas Division of Agriculture, with partners in the public, private, and non-profit sectors.  To learn more about Breakthrough Solutions, our partners, or any of the community development programs at the Cooperative Extension Service, contact your county extension office, or visithttps://www.uaex.uada.edu/business-communities/strategic-planning/.