LITTLE ROCK – A new survey has found that a majority of the state’s farmers markets are seeing a rise in both customers and vendors, said Ron Rainey, extension economist with the University of Arkansas System Division of Agriculture. 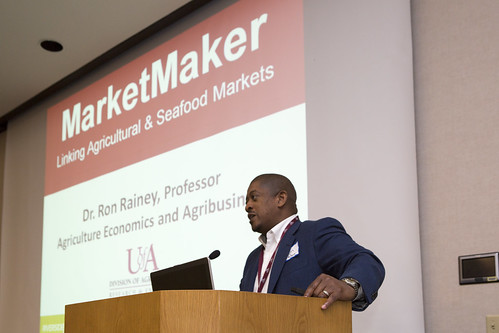 Rainey is heavily involved with farm-to-consumer sales in his role working with Arkansas MarketMaker, part of a national network that connect farmers and fishermen with food retailers, grocery stores, processors, caterers, chefs, and consumers.

Celise Weems, an extension program associate supporting MarketMaker said that “MarketMaker helps all players in the food system connect across the food supply chain linking from the field to the table.”

Arkansas has more than 100 registered farmers markets according to the U.S. Department of Agriculture.

“While a few markets showed slight declines, 56 percent of those markets that responded said they served more customers in the 2016 marketing year than previous years,” Rainey said. “The survey also showed that almost half the markets – 43 percent – increased the number of vendors.”

"Continued growth in the number of farmers markets across Arkansas reveals an expanding demand by consumers wanting to connect with agriculture and its array of fresh products. Since its inception, the directory has proven to be a valuable tool for accessing up-to-date information about local farmers markets," Rainey said. "Farmers markets play an extremely important role for both farmers and consumers linking urban and rural communities together. Farmers markets create local economic growth while providing access to fresh foods."

The few markets which reported decreases were spread around the state and were not in any of the state’s Metropolitan Statistical Areas. Of all the markets that reported increases, three of the top four of the state’s metropolitan areas indicated growth in vendors and customers.

Farmers markets are one of numerous marketing channels that farmers use to sell directly to consumers. The 2012 Census of Agriculture placed the value of those direct-to-consumer products in Arkansas at about $6.3 million. Since 2006, there has been a 180 percent increase in farmers markets nationwide, and with Arkansas’ farmers markets nearly doubling in the last decade, the state is ranked among the top 10 for the biggest increase in the number of farmers markets, according to USDA.