By Meleah Perez
U of A System Division of Agriculture

FAYETTEVILLE, Ark. — Every week Arkansas farmers hope to put the devastating storms of late April and early May behind them, and every week, nature brings another round of heavy rains, high winds and hail. 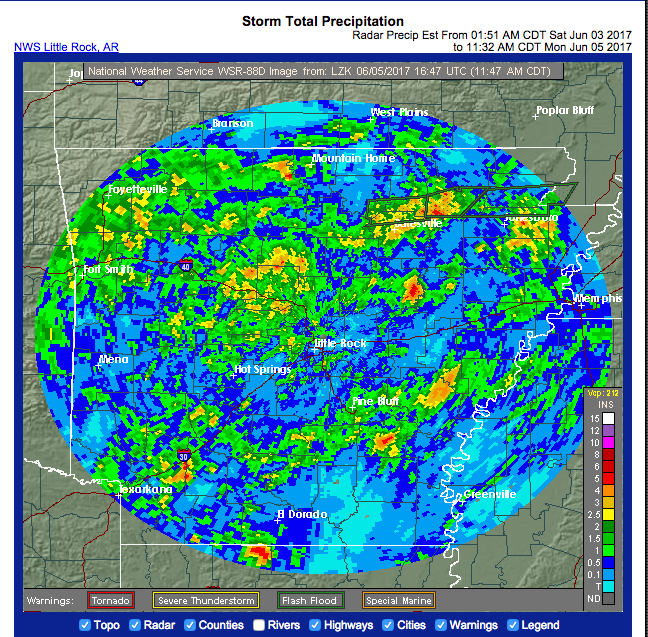 Flooding over the last few weeks in Jefferson County forced farmers to replant about 250 - 300 acres of corn and rice, said Anthony Whittington, Jefferson County extension agent with the University of Arkansas System Division of Agriculture.

High winds with the storm also caused corn or lean, or “lodge,” or flattened plants to the ground. In some cases, the stalk breaks – a condition called “greensnap” and, in some cases, the corn dies, Whittington said.

Jefferson County was not the only county affected.

The storms have delayed production and planting in Poinsett County, said Craig Allen, Poinsett County extension agent for the Division of Agriculture.

“It’s just been so wet after the previous floods. We’re trying to get the ground dried up and levees pulled back,” Allen said.

“I think we will see some yield loss at the end of the year,” Capps said. “Could be 5 to 10 percent off of five-year average.”

Other counties had little to no damage to their crops.

“Phillips County has been lucky so far this spring,” said Robert Goodson, the University of Arkansas System Division of Agriculture extension agent for the county.

Goodson said there was a little flooding, but it affected less than 1 percent of crops and did not damage anything because they are protected by levees.

“Everything is fine, except for those few with water damage,” Goodson said.

When there is damage to crops, there are extra costs that come into play, said Eric Wailes, a University of Arkansas distinguished professor in the Department of Agricultural Economics and Agribusiness. Those costs include repairing damage to fields and structures; having to purchase additional seed for planting and redoing fertilizer and weed control applications.

In late May, the Division of Agriculture estimated damage from April’s storm effects at $175 million, and offered a caveat that the figure was expected to climb as receding flood water revealed more damage. (See http://bit.ly/2ro6lrM)

“It’s more of a bind on farmers than there already was,” Allen said.

If a crop is planted late, which is the case for replanting, it is outside of the optimal planting season, so the yields will be lower, Wailes said.

There are costs that are associated with lower production and then lower amounts of crops that are processed, he said.

“It has an additional impact on the value added for the state,” Wailes said.