By Fred Miller
U of A System Division of Agriculture
June 2, 2017

(391 words)
(Download a MS Word version of this story here.)

FAYETTEVILLE, Ark. — Steven C. Ricke, director of the University of Arkansas System Division of Agriculture’s Center for Food Safety, received the W.C. Frazier Memorial Lecture award from the Food Research Institute at the University of Wisconsin–Madison in May. 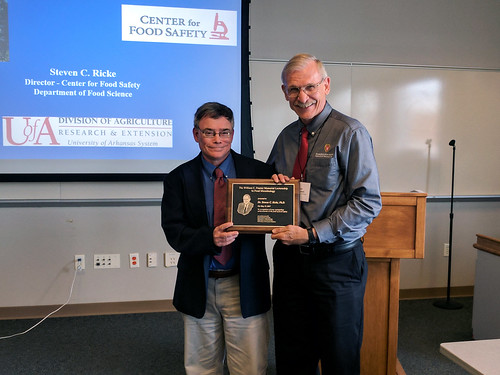 Ricke, professor of food science and holder of the Donald Buddy Wray Chair in Food Safety, presented a lecture at the university May 17 on his research on foodborne Salmonella in poultry and food production.

Ricke’s research is primarily focused on virulence and pathogenic characteristics of foodborne salmonellae. Dr. Ricke’s Salmonella research projects have emphasized studies on the growth, survival and pathogenesis under conditions encountered during food animal production and processing.

“Salmonella continues to persist in food and poultry production systems despite efforts to control and limit its ability to colonize food animals and contaminate meats,” Ricke said.

Research continues to advance understanding of the pathogen and to improve methods of limiting its dissemination, Ricke said. “The use of a variety of molecular tools has made it possible to better pinpoint sources and transmission routes during food production,” he said.

Ricke anticipates that new scientific understanding of Salmonella and application of developing technologies will yield more effective and potentially more precise means of reducing Salmonella contamination in food production systems. Even more, he said, such advances may finally prevent the pathogen’s establishment.

Ricke received his B.S. and M.S. in Animal Science from the Univ. of Illinois and his Ph.D. from the Univ. of Wisconsin with a co-major in Animal Science and Bacteriology. From 1989 to 1992 he was a USDA-ARS postdoctorate in the microbiology department at North Carolina State University. He was a professor at Texas A&M University poultry science department for 13 years.

In 2005, he became the first holder of the Donald Wray Endowed Chair in Food Safety and director of the Division of Agriculture Center for Food Safety. He is also a faculty member of the department of food science and the Cellular and Molecular Graduate Program.

The W.C. Frazier Memorial Lectureship was established at the University of Wisconsin’s Food Research Institute and the departments of bacteriology and sood science by Professor Mike Foster to honor Professor Frazier for his many contributions to food microbiology.

Each year, the university invites an individual who has made outstanding contributions in food microbiology and food safety to present a lecture on a subject which impacts food safety.