By Ryan McGeeney
U of A System Division of Agriculture
June 1, 2017

(413 words)
(Download a MS Word version of this story here.)

DE QUEEN, Ark. –  As definitions of “neighbor” go, the 280-plus miles gap between De Queen and Pocahontas might push the envelope for some folks looking to lend a helping hand. But for members of the Lakeside 4-H Club, based in De Queen, responding to calls from those in need after natural disasters has become almost reflexive. 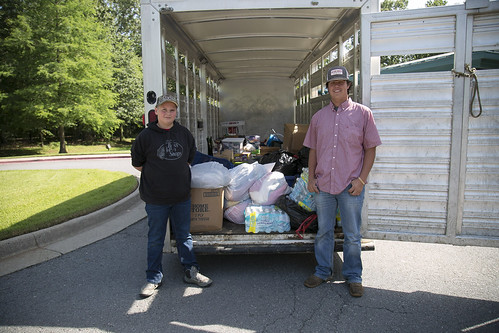 After collecting and delivering donations to tornado survivors in Moore, Oklahoma in 2013 and Mayflower/Vilonia in 2014, doing the same for flooding survivors in the northeastern Arkansas town only seemed like an obvious call to service.

In early May, many Pocahontas residents had to evacuate their homes as torrential rains caused nearby rivers to top their banks, flooding wide swaths of Randolph and other counties. Agronomists with the University of Arkansas System Division of Agriculture estimated that the flooding had caused approximately $175 million in crop loss related damaged, destroying about 360,000 acres of rice and other crops.

On Wednesday, Sevier County Cooperative Extension Service Staff Chair Rex Herring delivered a 20-foot horse trailer of donated clothing, canned food and other supplies to the Randolph County Nursing Home, which is currently serving as the area’s primary emergency shelter. He was accompanied by Alec Turner, 13, and Brennen Seymour, 16, both members of the Lakeside 4-H Club.

Herring said that after Randolph County Cooperative Extension Service Staff Chair Mike Andrews issued a list of needed supplies to Extension offices across the state in mid-May, he offered to provide transportation for whatever donations members of the local 4-H club could muster.

“I told them that if they put the donations together, I would get them to Pocahontas,” Herring said. “And the 4-H’ers stepped up. They made it happen.”

Raul Blasini, a volunteer with the Ministerial Alliance currently helping to run the shelter, said the city had received an overwhelming number of donations.

“Right now, we have 35 pallets of water, 20 pallets of clothing and 40 pallets of canned goods and other food,” Blasini said. “And that after weeks of distributing the donations. I’m very proud of this community and everything they’ve done for the people in need here.”

As of last week, local media in Randolph County reported more than two-dozen displaced residents were still living at the shelter.