By Ryan McGeeney
U of A System Division of Agriculture
July 28, 2017

NEWPORT, Ark. — Anyone familiar with modern farming techniques can tell you that many growers are eager to incorporate the latest available technologies into their operations in an effort to increase productivity and profit. 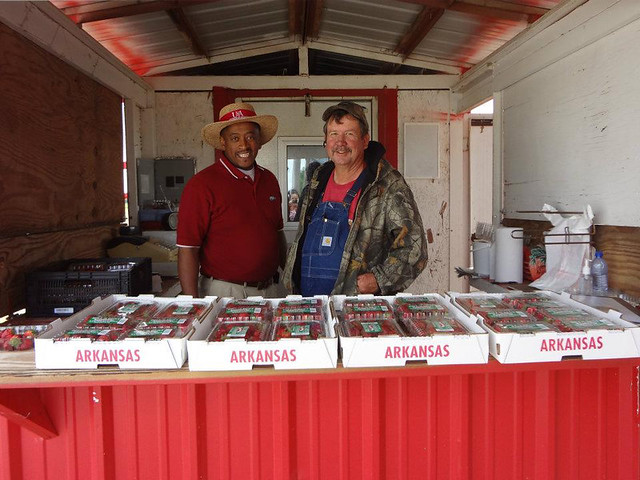 But not everyone is necessarily an “early adopter,” to put it mildly.

Bill Landreth, a long-time grower of strawberries, watermelons and other produce in Jackson County, was not especially interested in the world of “online marketing.”

“Bill said he didn’t really ‘believe’ in the Internet,” said Ron Rainey, Professor of Economics for the University of Arkansas System Division of Agriculture and head of the state’s MarketMaker program. “He took some convincing.”

Landreth has been a successful grower for many years, reaching consumers through a U-pick operation near Newport and through roadside stand sales, as well as to local groceries. Situated near Arkansas Highway 67, his produce has reached consumers throughout the Southern Plains and beyond through wholesalers.

Over the last several years, Rainey and his team have reached out to Arkansas growers, including Landreth, working to educate them on the potential benefits of expanding marketing efforts into the online frontier.

MarketMaker is a nation-wide network connecting growers, fishermen and other producers with groceries and other retailers, as well as processors, caterers and consumers. It emphasizes the use of the Internet and establishing an online presence as key to expanding growers’ reach in the national and global marketplace.

Since incorporating several of the program’s marketing techniques, Landreth has engaged and received feedback from consumers further and further beyond state lines, and his production has increased by 25 percent, Rainey said.

“He has a Facebook page, and his daughter is his ‘director of social media marketing,” Rainey said.

In 2012, a “Berries by Bill” sticker affixed to one of Landreth’s watermelons, which found its way to a grocer in Michigan, helped the purchaser find Landreth’s farming operation online, and led to additional demand.

“I have bought three of your seeded watermelons at Horrock’s in Battle Creek, Michigan,” wrote the consumer in an email to Landreth. “They are without a doubt the BEST I have had in years! I will be contacting Horrock’s and begging them to be sure and buy from you next year.”

“This is the type of thing farmers really need,” Landreth said.

Landreth also participates in the Arkansas Farm-to-School Program, organized by the Childhood Obesity Research Program and the National Farm to School Network.

Jason Floriani, a FSA loan officer with the Arkansas FSA, said that participating in the program, Landreth is able to reduce waste by moving more produce, while students gain increased access to fresh, locally-grown fruit that might otherwise be unavailable to them.

“Since strawberries are normally harvested from early April through the end of May, his strawberries add variety to the school menu before school is out for summer,” Floriani said.

“The connection between local farmers and schools is taking place in over 42,000 schools across the country, with 195 schools participating in Arkansas,” Floriani said.

According to recent data from the U.S. Department of Agriculture’s Farm to School Census, Arkansas schools spent about $1.26 million in procuring produce from local farms, ranches and fisheries during the 2013-2014 school year.