FAYETTEVILLE, Ark. — Studying plant stresses under controlled conditions in a laboratory or greenhouse is one thing. But what happens when those plants get to the field where environmental stresses are unleashed?

That’s a good question — one for which Ken Korth, professor of plant pathology with the University of Arkansas System Division of Agriculture is seeking answers. 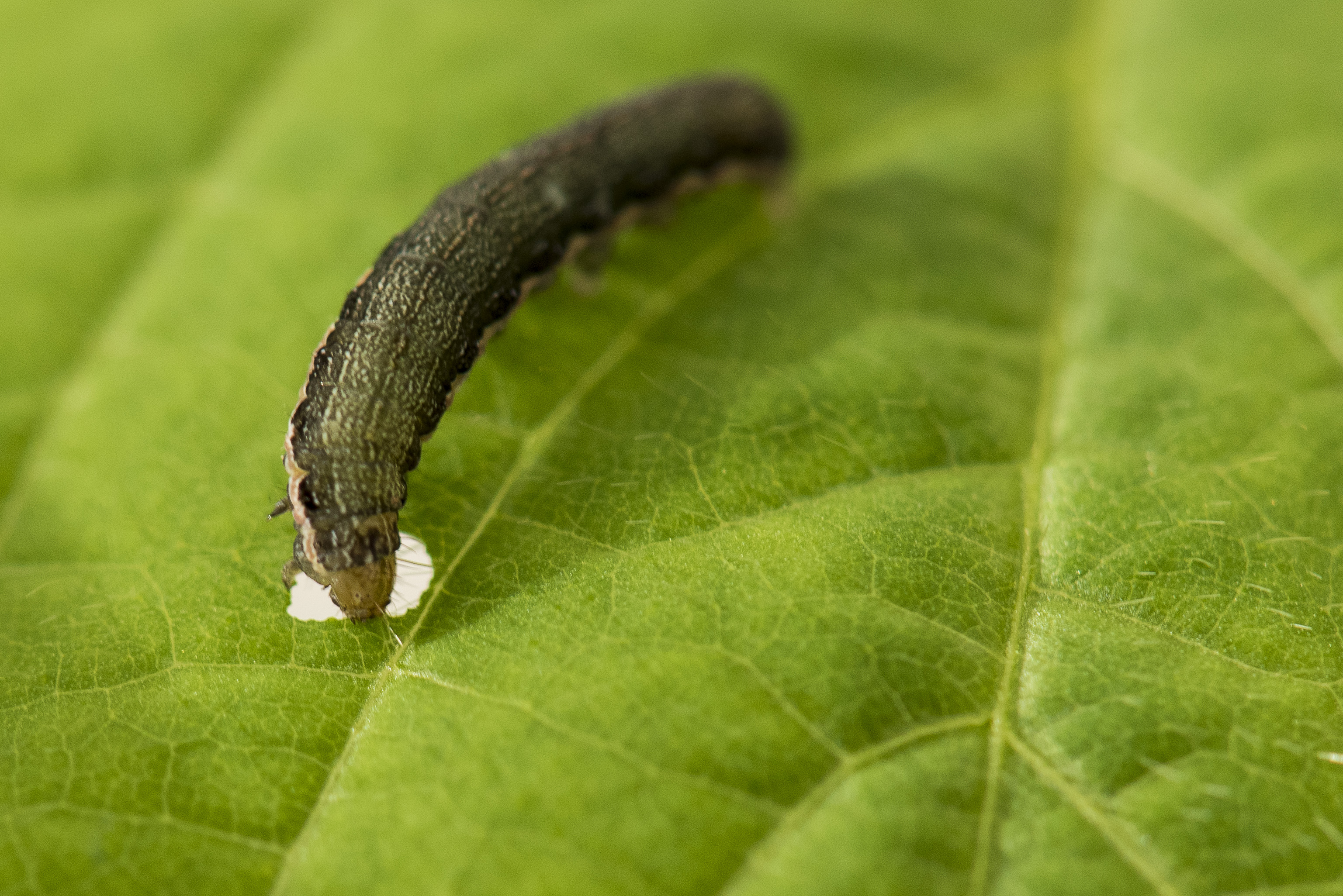 MUNCHING - Armyworms feed on salt-stressed soybean plants in a greenhouse experiment to determine how much the plant's defense mechanisms are reduced by salt stress. (U of A System Division of Agriculture photo by Fred Miller).

Scientists at the Division of Agriculture and elsewhere have identified soybean genomes with tolerance to chlorides — salts that occur in soils and water sources in many areas of the United States, including much of southeastern Arkansas.

Chlorides originate from multiple sources, Korth said. Some come from stressed aquifers. Others are naturally occurring in soils. In areas near seacoasts, chlorides come from infusion of brackish coastal waters.

Soybeans grown throughout the state and especiallu in some parts of southeast Arkansas are subject to salt stress that can weaken the plant and reduce yields, Korth said.

In research supported by the Arkansas Soybean Promotion Board, Division of Agriculture scientists are screening breeding populations of soybeans, using genetic tools to identify genes important to salt stress tolerance, Korth said. They are looking for genetic markers that can assist plant breeders in identifying breeding lines with high salt tolerance.

Those can then be incorporated into the division’s soybean breeding program to develop improved varieties that will flourish in areas of high chloride content, Korth said.

A simple experiment demonstrated that the tolerance trait resides in the rootstock, Korth said. “We grafted the top of a salt-tolerant plant onto susceptible rootstock and the plant became susceptible.”

Developing soybean varieties that are salt-stress tolerant is important, Korth said. But in farmers’ fields, those plants will also face other sources of stress. What happens, for example, when salt-stressed soybeans also are being chewed on.?

Korth has long conducted research investigating how plant genes are turned on when insects chew on them. Some plants, including soybeans, form calcium oxalate crystals around the secondary veins in their leaves.

These rock-hard crystal formations are believed to help the plant regulate calcium levels, but they also appear to serve as a defense mechanism against chewing insects. Korth’s research has shown that caterpillars avoid the calcium deposits. “It’s like pouring sand on your sandwich,” he said.

A gene called “LTP” is expressed — it turns on — when insects chew on plants, Korth said. Its role in insect tolerance is not known, but the correlation between the gene’s expression and other defense responses makes it an effective genetic marker for identifying plants with a stronger self-defense mechanism.

What Korth wants to know now, is whether salt stress has an impact on a plant’s defenses against chewing insects. “And if so,” he said, “What’s the mechanism that makes that work?”

In greenhouse tests, Korth is treating soybean plants with varying low levels of salt, such as can be found in Arkansas farm fields. He then exposes them to armyworms — a common caterpillar pest in Arkansas that chews on soybeans and other plants.

“Even some plants that can tolerate salt stress in most ways may become more susceptible to insect stress,” Korth said.

The next step, Korth said, is to discover the genetic mechanisms at work in this interaction. “The long-term goal,” he said, “is to learn how this is happening and how to identify plants than can defend themselves against insects even under salt stress.”