By Mary Hightower
U of A System Division of Agriculture
July 7, 2017 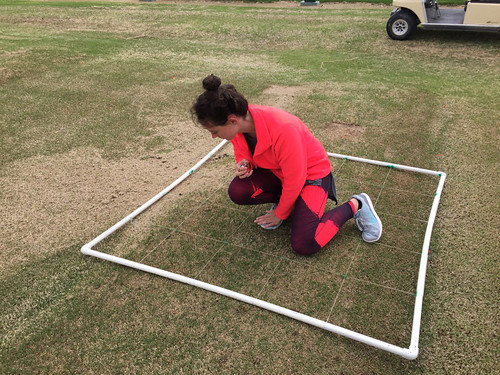 Earthworms ingest dirt along with any microbes, fungi, decomposing leaves and anything else that might be food, the resulting poop is expelled. Worm poop, or vermicast, is much sought after by gardeners as a rich fertilizer. Worms often expel this poop on the soil surface as dense mounds of tiny pellets.

These mounds are what gives golf course managers and players fits, especially in golf greens whose fine dwarf grasses are trimmed as closely as possible to the dirt. Vermicast can clog mowers and affect golf strokes.

Paige Boyle, a master’s student at the University of Arkansas, is looking to better understand what might discourage earthworms from areas where they are unwanted. Her research, with Mike Richardson, professor-horticulture and turfgrass expert with the University of Arkansas System Division of Agriculture and the Bumpers College of Agricultural Food and Life Sciences.

She has three objectives: To see if soil temperature and moisture make a difference in earthworm pooping in bermudagrass tee boxes; to see if root zone or top dressing affects either the amount of vermicast or the diversity of earthworm species; and to see what species are present under golf courses in the “transition zone.” Arkansas is a transition zone, a place where are areas where neither cool nor warm season grasses are completely adapted.

Topdressing is the application of sand on top of the grass at a golf course. Various rates of application can add firmness and smoothness to the course and improve the soil.

There has been some research into how the pH level of soil affects worm populations, but varied results and concerns about turf health rendered this method a big question mark.

Relocation has been tried, but worms tend to like their turf.

“Even if you remove all the soil from an area, they return to the area over time,” she said.

They can also be moved around by cultural practices, with their cocoons – their eggs – catching rides on equipment moving soil or sand from location to another, or in the very sand that’s being used for topdressing. The cocoons “are viable regardless of whether the sand or soil is super dry,” she said.

Boyle said that one key to control with topdressing is the species of earthworm involved. Some Arkansas native species are tiny – just 2 to 3 centimeters in length. The big worms most familiar to people are invasive – species from Europe and Asia — and have been in the U.S. for years. These are the big worms that wind up desiccated on the sidewalk after a rain or end up as bait on the end of a fish hook.

Boyle is collecting DNA samples from the worms in her 16 research plots to determine what species they are. At each plot, she collects and counts casts, and takes the soil temperature.

How does she get her samples?

“We go to our plots and dig a 1-foot hole, 8 inches deep and hand sort through all of the material we dig up,” she said.

Earlier research suggests that “some of these native earthworms may have higher temperature/lower moisture tolerances, especially in sand-based greens, where the temperatures are higher than the surrounding soil,’” Boyle said. “Knowing what species is important and they can change over time.”

“There’s not a whole lot of research going on with earthworms,” she said. “Most worm research is old – 1950s.”

Boyle’s undergraduate adviser, Mary Savin, professor of microbial ecology within the Division of Agriculture, had done some work with earthworms. Savin, along with Richardson, created the project for Boyle.

“The work that Paige is doing is very interesting and has been well-received by the golf course industry,” Richardson said. “It is a topic that has not been researched enough and the industry is seeking some insight and answers into this issue.

“Although the results of this project may not eliminate the problem, it will give us a better understanding of the ecology of the worms, which could lead to future solutions,” he said.

For more information about horticulture, contact your county extension office or visit www.uaex.uada.edu or http://horticulture.uark.edu/about-us/focus-areas.php.