NEWSROOMS: This version SUBS first 3 grafs to CORRECT that the enhance penalties will go into effect Aug. 1, not July 11; rule is effective for 120 days.

LITTLE ROCK – A proposed emergency rule that places a ban on the use and sale of dicamba in Arkansas is set to go into effect July 11, following actions by two legislative committees on Friday.

At issue was a rule put forward by the Arkansas State Plant Board that would ban sale and use of dicamba in Arkansas, except for forage and pasture applications. (Also Friday, Missouri issued a statewide stop sale, use or removal order stopping all sales and use of all dicamba pesticide products labeled for agricultural uses. See: http://agriculture.mo.gov/plants/pdf/Dicamba-Statewide-SSURO-7-7-17.pdf) Enhanced penalties, up to $25,000 per infraction, were to go into effect Aug. 1.

The emergency rule is effective for 120 days. 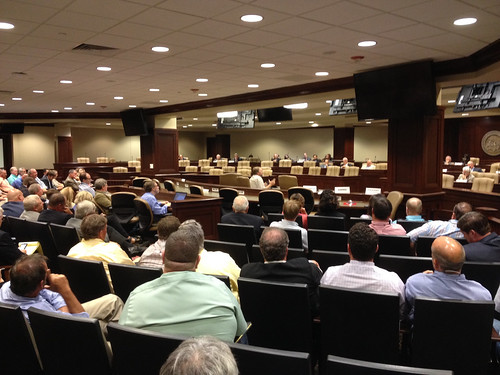 TESTIFYING - Scene from the Joint Agriculture, Forestry and Economic Development Committee meeting July 7, 2017, in Little Rock. The committee was tasked with making a recommendation to the executive subcommittee of the Arkansas Legislative Council on a proposed ban on the use and sale of dicamba. (U of A System Division of Agriculture photo by Mary Hightower)

The proposed emergency rule was approved by the Arkansas State Plant Board on June 23. A week later, Gov. Hutchinson reviewed it and sent it to the Executive Subcommittee of the Arkansas Legislative Council for action.

The subcommittee met July 5 and voted to go into recess until July 7, requesting that the Joint Agriculture, Forestry, and Economic Development Committee make a recommendation for the executive subcommittee to act upon.

After hearing hours of testimony from farmers, Arkansas Agriculture Secretary Wes Ward, and others in the agriculture industry, the joint ag committee voted to recommend the State Plant Board’s proposed ban be supported.

The testimony began with comments from Ford Baldwin, a weed scientist and consultant; and Dan Westberg, a weed scientist with BASF, the company that manufactures Engenia, the only dicamba product allowed for in-crop use after April 15 in Arkansas. Also testifying was Terry Fuller, a farmer and state plant board member who noted that the number of dicamba-related complaints to the board had reached 610 on Friday morning.

The ALC’s executive subcommittee meeting opened with Senate President Pro Tem Jonathan Dismang outlining the options available to the subcommittee. Within minutes, the subcommittee voted to take no action on the recommendation, enabling the proposed emergency rule to move forward.

Either chair of the Arkansas Legislative Council or a majority of members of the ALC can, within a day of the subcommittee’s review, call a meeting to reconsider the executive subcommittee’s decision. Such a meeting would have to occur on Monday, July 10.

The issue has been high profile for weeks -- an agriculture story being covered by radio, television stations and reporters that typically don’t cover the ag beat.