Soybeans, cotton up, rice down in USDA acreage report

By Ryan McGeeney
U of A System Division of Agriculture
July 2, 2017

LITTLE ROCK – After a tumultuous spring of heavy rains and flooding, Arkansas soybeans and cotton returned to acreage numbers not seen in the state in several years, while rice acreage — and its estimate harvest — dropped by nearly a third from last year, according to a crop acreage report published Friday by the U.S. Department of Agriculture. 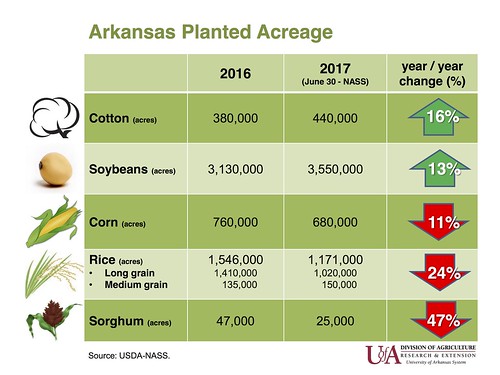 The USDA’s National Agricultural Statistics Service reported that Arkansas producers planted an estimated 3.55 million acres of soybeans, an increase of more than 420,000 acres over 2016 numbers. Jeremy Ross, extension soybean agronomist for the University of Arkansas System Division of Agriculture, said soybeans likely absorbed some acreage originally intended for rice or corn, which either suffered from prevented planting or was lost to flooding after planting. 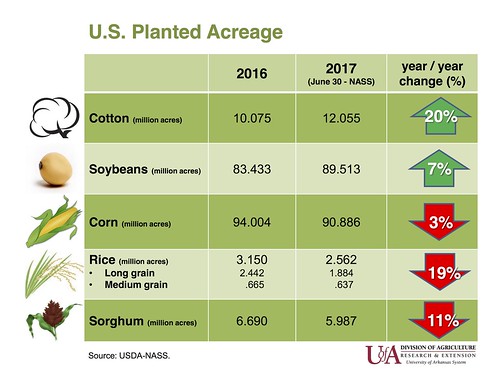 Which is not to say soybean growers did not also have to contend with the fallout from the severe flooding in May. Economists and agronomists with the Division of Agriculture estimated that more than 121,000 acres of soybeans were lost due to rain and flooding between May 8-12. Overall, the flooding was estimated to have caused approximately $175 million in crop losses in the state, with much of the damage impacting the northeastern third of Arkansas.

“Conditions for planting have been spotty,” said Ross. “We had a really good early start, followed by some pretty wet conditions into April and May in certain areas. Planting has been so strung out that we’re currently seeing everything from beans in the late stages of reproduction to beans that are just now being planted.”

Nationwide, soybean acreage is up 7 percent, according to the report.

In late march, the USDA’s prospective plantings report offered an even grander vision, with Arkansas growers estimating their overall cotton acreage at 500,000 acres. Bill Robertson, extension cotton agronomist for the Division of Agriculture, said that periodic rains in late April and May fouled the crop’s optimal planting window.

Nationwide, cotton acreage increased by about 20 percent over 2016, to approximately 12.1 million acres.

The little legume that could

Peanuts, which have been making a slow but steady comeback in Arkansas over the last few years, surged another 25 percent in acreage, from 24,000 in 2016 to 30,000. Travis Faske, an extension plant pathologist for the Division of Agriculture who has been serving as the division’s de facto peanut agronomist for several years, said Arkansas peanut growers benefitted from strong crop quality and increase in acreage availability.

“Peanut prices increased a bit to about $500 a ton, depending on the contract type,” Faske said. “But peanuts are more like a vegetable than a row crop — as growers contract with a buyer, such as Birdsong Peanuts or Golden Peanut, before the season begins, based on the grower’s previous performance and acreage availability, a buyer may offer a grower another 300 or 400 acres, if they’re up for it.”

The May flooding did impact peanut growers, particularly in Lawrence and Randolph counties, Faske said, but growers in surrounding counties picked up many of those lost acres.

“It balanced out,” he said. “It affected the individual grower, but not the total number of acres in the state.”

Rice hardest hit by May flooding

Even before the spring flooding, however, growers were already pulling back slightly from the previous year’s rice investments. Jarrod Hardke, extension rice agronomist for the Division of Agriculture, said market prices and input costs weighed on growers’ minds.

“Price was obviously a primary concern for most growers,” he said. “Low prices, combined with last year’s lower yields, created a lack of confidence in being able to turn those things around. Some of the possible returns on soybeans and corn may have looked a little better, even if they’re not great, because they have lower costs of production.”

The May rains and flooding impacted more than 100,000 acres of rice production, according to a report issued by the Division of Agriculture in late May, costing the state’s agriculture industry an estimated $34.9 million. Much of the financial impact was due to the fact that input costs, including seed, fuel and fertilizer, had already been sunk into the ground before the rains.

“We had a good run on very early planting, but then the flooding took out some acres,” Hardke said, although some of that acreage was able to be replanted in rice in early June, and some additional acres were planted in rice in response.

Wheat holds steady, while some other grains fall

Lastly, the state’s momentary love affair with sorghum appears to be over. In 2015, Arkansas growers planted approximately 450,000 acres of the grain; in 2016, that number fell precipitously to 47,000 acres, and again in 2017 to approximately 25,000 acres, according to the USDA report.

Jason Kelley, extension wheat and feed grains agronomist with the Division of Agriculture, said a combination of market prices and insect pressure triggered the grain’s decline.

Scott Stiles, an economist with the Division of Agriculture, said plummeting sorghum prices reflected a drop in its export to China.

“They’re trying to liquidate a huge stockpile of corn,” Stiles said. “There’s a preference for using their domestic corn supply as opposed to importing sorghum. Compared to 2015, U.S. sorghum exports to China are down 54 percent.”

Additionally, sugarcane aphids have proved a powerful, profit-draining menace for the crop.

“Sugarcane aphids had been pretty nasty over the past year,” Kelley said. “That’s a No. 1 concern, insect-wise, anymore. They’re easy to scout for, but they’re difficult to control. Some fields may require more than one pesticide application. So it adds expense to the crop — a crop for which there may not be a lot of profit potential anyway.

“You get the two of those together — aphids and a big market price drop — and the profitability just isn’t there,” he said.