FAYETTEVILLE, Ark. – James N. Moore’s handiwork appears on every continent save Antarctica and he achieved some of the highest honors in his profession. Yet Moore remained firmly grounded -- almost unassuming -- but could not hide what his students and colleagues called greatness. 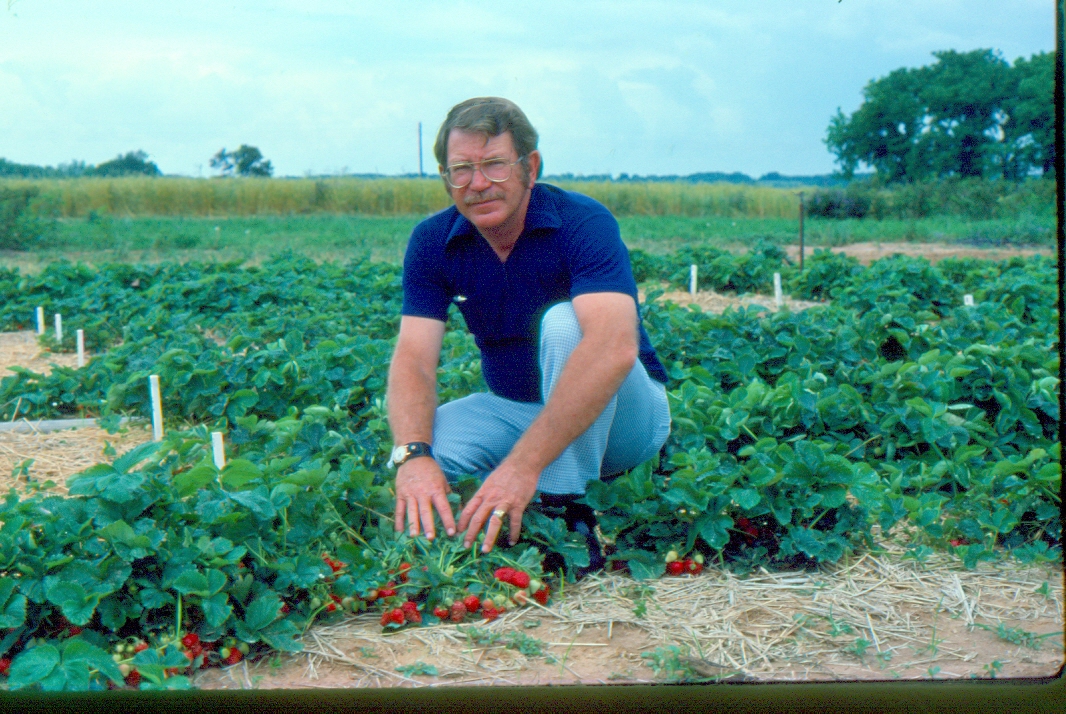 Moore was a giant. In 1964, he established the fruit breeding program within the University of Arkansas System Division of Agriculture that quickly became one of the most influential in the world.

Moore passed away on Sunday, aged 85.

“Jim had a passion for horticulture and was a gifted teacher,” said Mark Cochran, vice president-agriculture and head of the University of Arkansas System Division of Agriculture. “He leaves a tremendous legacy, not only on farms, orchards and vineyards around the world, but also in the students he taught, who will carry on his work for decades to come.”

"Dr. Moore was a giant in his profession, and he laid the foundation of the extremely successful fruit breeding program which is today one of our premier research programs,” said Clarence Watson, director of the Arkansas Agricultural Experiment Station.

Born in Vilonia and raised in Plumerville, Moore served in the Air Force following high school and met his wife, Janita “Jan” Fitzgerald of Morrilton, soon after discharge. Encouraged by his mother, Moore attained an associate degree from Arkansas Tech University in 1954, followed in 1956 by a bachelor’s degree in horticulture and in 1957, a master’s in horticulture, both from the University of Arkansas.

Moore’s next step was moving to the Garden State, earning his PhD from Rutgers University in 1961. His time in New Jersey was pivotal. There he worked with Fred Hough, leader of Rutgers’ fruit breeding program who had already achieved national renown within horticulture circles for his work on apples, peaches and strawberries. It was in working at Rutgers he met Jules Janick, now the James Troop distinguished professor of horticulture at Purdue. It was the beginning of a collaboration that would last a lifetime.

“Jim was a great horticulturist and a great man and will be sorely missed,” Janick said. “I will say that the work he started and is being continued by John Clark will continue to have a tremendous impact on American fruit production.”

Clark, a distinguished professor of horticulture for the University of Arkansas System Division of Agriculture, inherited the fruit breeding program from Moore.

From 1961-63, Moore worked for the U.S. Agriculture Department at Beltsville, Maryland, as a fruit breeder.

“Jim loved to tell the story of his choosing to come back to Arkansas, leaving the USDA breeding position. He made his decision, and in late 1963 went in to tell his USDA boss he was moving home,” Clark said.

He began his faculty appointment at Arkansas in 1964.

Moore developed a very broad breeding program that encompassed blackberries, strawberries, peaches, and grapes, and added blueberries later in his career. His achievements in fruit breeding were monumental, with more than 50 varieties released from his efforts. Among the most important were Cardinal strawberry, Navaho and Shawnee blackberries, Reliance and Mars grapes, Bonfire peach, and Ozarkblue blueberry.

Although he retired from leadership of the Arkansas fruit breeding program at the end of 1996, his genetic contributions have continued to result in new varieties – with several being named for him including: Prime-Jim® blackberry, Norman blueberry, GoldJim peach, and Amoore Sweet nectarine.

In further use of breeding materials from his career efforts, he and colleague Clark developed a grape with a unique flavor combination and much improved firm texture. This grape selection, although not adapted to the winter cold and summer rains of Arkansas, was used as a mother plant in a hybridization in table grape breeding in California and resulted in the new innovation known as “Cotton Candy TM.” Now entering the national and international market, Cotton CandyTM is unlike any other table grape in flavor, with the flavor coming from the Arkansas parent.

A prolific writer, Moore had more than 300 professional publications in his career. He was internationally known for his contribution as co-editor of a series of reference books on fruit breeding, including “Advances in Fruit Breeding” in 1975 and the trilogy series “Fruit Breeding” in 1996. Moore was an accomplished speaker, giving hundreds of presentations to grower and professional meetings in his career.

He served as president of the American Society for Horticultural Science and American Pomological Society as well as numerous department, Division of Agriculture and university committees.

Moore received many awards in his career. He was recognized as a distinguished professor at the University of Arkansas, its highest academic appointment. He also received the UA Alumni Association Outstanding Faculty Award, as well as being the first recipient of the University of Arkansas System Division of Agriculture Spitze Land Grant University Faculty Award for Excellence. He was a Fellow of the American Society for Horticultural Science and ortHOHOrreceived the Wilder Medal from the American Pomological Society. He was inducted into the Arkansas Agriculture Hall of Fame as well as the Hall of Fame of the American Society for Horticultural Science.

Yet for all his successes in the orchard and vineyard, his real love was in growing students. Moore taught at both the undergraduate and graduate levels, averaging six to 10 graduate students each year. He received high ratings from students, to whom he was both approachable and unassuming. As one outstanding student remarked, “We were being taught by a great man, yet you would never know it from his manner.”

“He loved to work with students on their various research projects and inspire them to make a difference in their careers,” Clark said. “This inspiration continues today as many of these continue in fruit research and expanding on the ideas he shared as an adviser.”

Maria Bassols Raseira, a fruit breeder at Empresa Brasileira de Pesquisa Agropecuária in Brazil, studied with Moore as a master’s student in 1972. It was her first time in the United States. “I was shy and scared,” she said. Struggling with English and essay tests, she became discouraged. “I wanted to quit, but Dr. Moore wouldn’t let me.”

She would go on to work with Moore on her PhD, and he would become “Uncle Moore” to her growing family, and Moore and his wife Jan would become her American family.

Ed Hellman, professor of viticulture and an extension specialist for Texas A&M AgriLife Extension and Texas Tech, studied at Arkansas from 1980-82. He recalled the many trips from Fayetteville to the Fruit Research Station near Clarksville through the winding roads of the Ozarks. After a day of evaluating fruit, “we then hurried back to Fayetteville for an evening intramural softball game; Jim was our star pitcher,” he said. “I learned a lot from Jim on those Clarksville trips; his knowledge and work ethic were incredible. He was a consummate professional and an outstanding mentor.”

Patrick Byers, regional horticulture specialist for the University of Missouri Extension Service, said of Moore: “He was an amazing professor, mentor, and supporter over the course of my career. He has also been an example to me as I work in Extension, as I could see his concern for and dedication to the fruit farmers of Arkansas and beyond.

“I'm convinced that his concern for his fellow man was what drove him to the level of excellence that he achieved,” Byers said.

His devotion to students may have stemmed from his own experience with a gifted teacher. Daughter Pamela Millican of Arlington, Texas, tells the story of one of his high school teachers who wanted to ensure Moore continued his education after earning his associate’s degree.

She told him, “‘If you will sell me a cow, I will give you $50.’ That’s how mom and dad were able to move to Fayetteville for him to get his bachelor’s there. That’s how poor they were. That $50 made a difference.”

Moore is survived by his wife, Jan Fitzgerald Moore, daughter Pam Millican (Scott) and grandchildren Ryan Tharp (Amy) and Hilary Millican, son David Moore (Diana) and grandchildren Chris Riley and Shawn Riley (Janie), great-grandchildren Elliott Tharp and Ethan Riley and several nieces and nephews, as well as his students, who became a part of his family.

Memorials may be made to the University of Arkansas Foundation for the James N. Moore Fellowship, c/o Department of Horticulture, 316 Plant Sciences Bldg., Fayetteville, AR 72701.