By Emily Thompson
U of A System Division of Agriculture
Jan. 27, 2017

FAYETTEVILLE, Ark. -- Producing enough wheat to keep up with a growing global population has been a constant struggle for farmers and a challenge to wheat breeders. A University of Arkansas System Division of Agriculture professor has joined the International Wheat Yield Partnership, a global program zeroing in on the genes that regulate wheat yield. 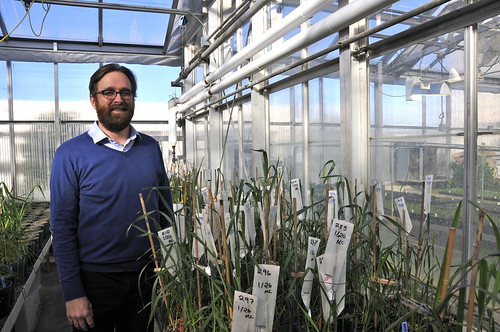 Esten Mason, Division of Agriculture wheat breeder, is one of 15 breeders collaborating with the University of California, Davis, to identify the genes that impact wheat yield. The partnership was made possible through a $9.7 million grant funded through the National Institute of Food and Agriculture.

Mason said that breeders have known for a long time where these genes are located, but they were never able to identify them.

“The technology has never been there to easily identify and utilize them, which has been a hindrance to genetic improvement of wheat yield,” said Mason.

Using knock-out mutants of wheat developed at the University of California, Davis, advances in genome editing and a nearly completed wheat genome sequence, Mason will be able to study the functions of different genes and identify those that most affect wheat yield.

Sixty-five percent of wheat varieties are still produced in the public sector at university breeding programs. Mason said joint projects like this one enable breeders to come together and share research.

Mason’s research will be based on previous studies conducted in his lab and will focus on a gene they have identified to have an effect on the number of kernels produced on a wheat spike.

“One of the major goals in the project is to train 15 Ph.D. students in next generation plant breeding,” said Mason.

The students will be cloning the genes, studying their functions, and putting them into new wheat varieties.

For a farmer to break even in Arkansas, an average of 60 bushels of wheat an acre must be produced. The statewide average is 55 bushels an acre, said Mason.

After the yield genes have been identified, breeders hope to deploy them to increase wheat yield. Targeted gene deployment like this has been used for years in disease resistance breeding and for other inherited traits. Wheat grain yield is a complex trait, which makes it more difficult to improve.

“It is an ambitious project, but the ultimate goal is to increase yield and make wheat more productive and profitable,” said Mason.