By Mary Hightower
U of A System Division of Agriculture
Jan. 20, 2017

FERNDALE, Ark. – The legacy of one family is helping benefit hundreds of others in Arkansas through the revitalization of a multipurpose building on the grounds of the C.A. Vines Arkansas 4-H Center. 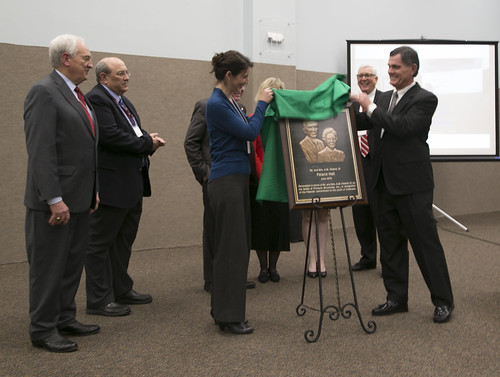 On Thursday, about five dozen people gathered for the re-dedication of Feland Hall, built nearly 25 years ago and named for the late Armstead Feland III, head of Southern Farmers Association, and a founding member of the Arkansas 4-H Foundation.

Feland’s son, Will Feland of Cabot, who also served as a member of the Arkansas 4-H Foundation Board, was the donor behind the $475,000 building renovation.

"Feland Hall is the most utilized facility at the C. A. Vines Arkansas 4-H Center,” said Ewell Welch, executive director of the Arkansas 4-H Foundation, which operates the center. “The Foundation is extremely grateful to the Feland family and especially Will Feland for their support of 4-H members in Arkansas and their commitment to assuring that 4-H will continue to have the resources available to help our program develop today’s youth into tomorrow’s leaders.”

Will Feland, of Cabot, and his wife, Tiffany and members of their family unveiled a plaque marking the building’s re-dedication.

Feland said that as a young man, he remembered hearing his father talking about construction of the 4-H Center with C.A. Vines, who was then director of the Arkansas Cooperative Extension Service. Groundbreaking for the center was in 1979. The doors opened in 1980. Until then, the Arkansas 4-H program did not have a purpose-built place where all of its members across the state could gather.

While the older Feland didn’t want the hall named for him, Vines insisted.

And while the family was pleased to have a hand in the center’s development, Feland called Thursday’s ceremony “a re-dedication of the vision of Mr. Vines.”

“I was a 4-H member who sold chocolate bars to help buy land for this center,” she said. Once Vines, Feland and others “decided there was a need for this place, they made it a reality.”

Mark Cochran, University of Arkansas System vice president for agriculture and head of the system’s Division of Agriculture, noted the 4-H motto is a tribute to the vision and the life of the Feland family.

“When it comes to making the best better, you made an investment that will make a real impact on that,” he said. “Thank you for continuing the legacy.”

Rick Cartwright, interim associate vice president and head of the Cooperative Extension Service, knew Armstead Feland as an employer in his days with the Southern Farmers Cooperative. For him, the re-dedication was very personal.

“In your life, it’s rare to meet someone who truly inspires you in the right direction,” Cartwright said. “He was one of mine. He was a person of great integrity, who did not just talk about doing the right thing. He did it he lived it. His example has had a profound influence on me and many others, personally and professionally.”

“To Will and Armstead IV and others in your family, thank you for sharing your dad with us and all of Extension and 4-H,” he said.

Center Director J.J. Pitman said the changes in the building included new, more energy efficient lighting, walls and better insulation in the roof, plus new flooring and air conditioning ductwork. All of the changes have saved the center thousands of dollars a year in utilities.

About the Arkansas 4-H Center

Surrounded by woods and graced with its own lake, the center serves as a conference center available at reasonable rates for educational organizations, businesses, civic clubs, schools, church groups, government agencies and professional organizations. It is ideal for conferences, retreats, meetings, workshops, and training sessions.

Vines 4-H Center earned the 2016 “Best Team Building Center” from Arkansas Business, the eighth time it has been so honored. https://www.uaex.uada.edu/media-resources/news/2016/december2016/12-09-2016-Ark-ExCel-Vines-Center-awards.aspx