By Ryan McGeeney
U of A System Division of Agriculture
Feb. 10, 2017

VAN BUREN COUNTY, Ark. — For years, Shane Gadberry, an associate professor of ruminant nutrition and animal science for the University of Arkansas System Division of Agriculture, has been working to help cattle producers in central Arkansas get the most “bang for their buck” when it comes to feeding their herds through the winter, and ending up with healthy cows in the spring. 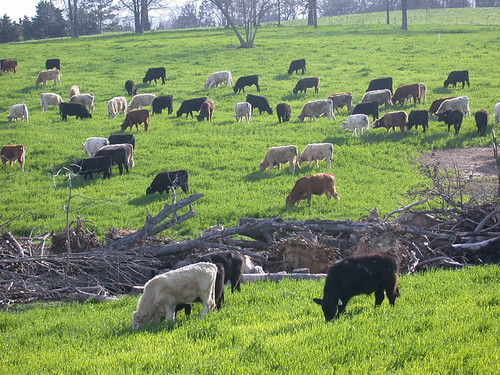 As the emerging data increasingly support the efficacy of their efforts, Gadberry, the Cooperative Extension Service agents of Van Buren County and researchers at the Division of Agriculture’s Southwest Research and Extension Center (SWREC) in Hope can point to a major potential impact on the state’s thousands of beef cattle operations.

The program engages county agents to recruit cattle producers in their respective counties to submit soil and hay samples to the SWREC for analysis. With the goal of keeping cows at the appropriate weight through the winter months — neither too thin nor too fleshy — the agents make recommendations on what kind, if any, nutritional supplementation producers should give to their cattle.

“In the more severe cases, they might be supplementing protein,” he said. “It doesn’t take much protein to overcome a protein deficiency. But when we look at their hay test, we find that the actual shortage is in energy. So they may spend the same amount of money, but on a more appropriate feed.”

Leon Wilson, a cattle producer who began managing a cow-calf operation near Dennard, Arkansas when he retired from education about 25 years ago, said he had participated in the winter feeding program multiple times over the past several years.

“The most important part of the program for me was the soil testing and the advice they gave me on purchasing fertilizer,” Wilson said. He said he had begun mixing in clover with his fescue on a Cooperative Extension Service agent’s advice through the program.

Gadberry said growers who adopted his team’s recommendation in recent years saw a median savings of more than $22 per cow per year in feed expenditures, entering the spring with a healthier herd to boot. And in a state with tens of thousands of beef cattle operations, that could translate into a major economic impact.

“The direct impact to participating farms last winter was about $47,000,” Gadberry said. “Now, if we consider that there’s 23,000 beef cattle operations in Arkansas — not all of them are in this situation, but if you look at our hay tests that come through the diagnostic site at Fayetteville, we do know that about 60-70 percent of the time, the hay samples did not meet cow lactation requirements.”

“Reproduction is the most important factor that drives the income, the economy, of beef cattle operation. So if we short cattle on feed, it costs us in reduced reproductive rates. So our first investment is to make sure we’re managing those cows every year, to calves in good body condition, and minimizing body condition loss after calving,” he said.