By Emily Thompson
U of A System Division of Agriculture
Feb. 3, 2017

LITTLE ROCK – The heavy footsteps of the Great Recession of 2007-2009 are still visible across rural Arkansas in the persistence of food insecurity, lack of medical facilities and personnel, and loss of jobs and household income, according to the 2017 “Rural Profile of Arkansas” published by the University of Arkansas System Division of Agriculture. 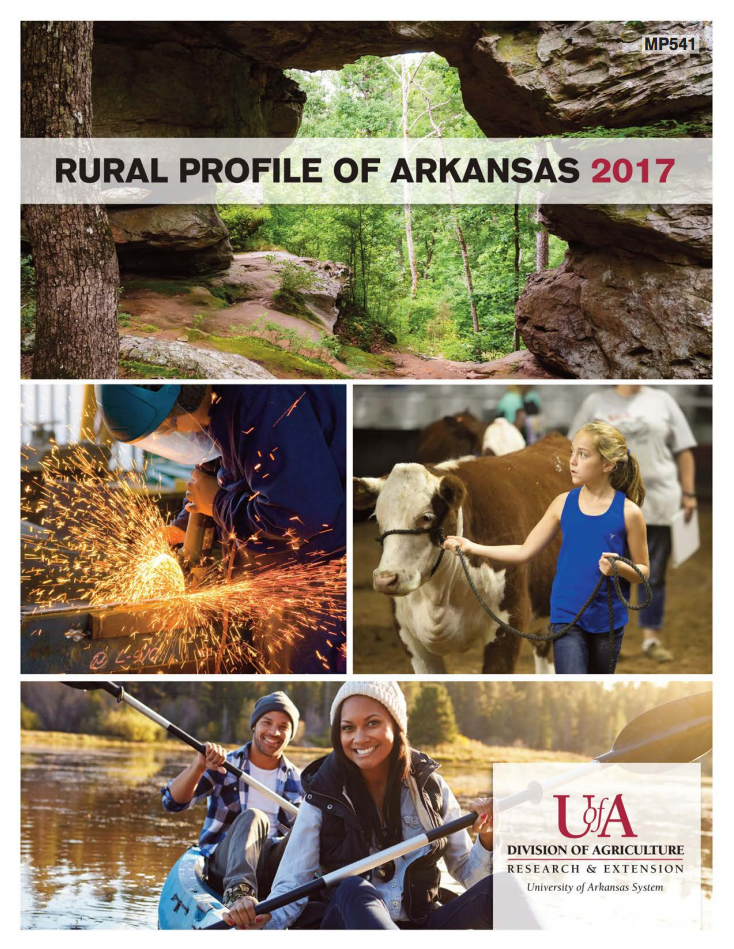 Cover of the 2017 Rural Profile of Arkansas, published by the U of A System Division of Agriculture.

The annual “Rural Profile of Arkansas,” is a data-driven depiction of social, demographic and economic characteristics of both rural and urban Arkansas. It’s designed as an aid to the state’s policymakers.

The report shows that the Delta and Coastal Plains regions of Arkansas continued to decline in population. For the first time in over a decade, the Highlands region, which encompasses both the Ozarks and the Ouachita mountain areas, also saw a decline in population. The state’s population grew 2.1 percent between 2010 and 2015, compared to the 3.9 percent growth rate nationally. Population losses in rural areas stemmed from outmigration. Urban population gains were due to births outpacing deaths.

“Up until recently, the Highlands continued to grow, unlike other rural areas,” said Zola Moon, PhD, clinical associate professor at the University of Arkansas and co-author of the report.

Previously, the Highlands grew because a large number of retirees moved to that region. That has slowed down in recent years, causing a population decline of less than 1 percent.

The 2017 report also shows that rural Arkansas has nearly 3 percent fewer jobs than it did in 2007. Wayne Miller, PhD, Division of Agriculture extension economist and co-author, said that a major factor in the struggling economy and population decline is the loss of manufacturing jobs.

“It’s (manufacturing) been a critical component of the economic base,” Miller said.

The Delta, Coastal Plains and the Highlands all saw a loss of manufacturing jobs from 2007 to 2015, and the jobs created in other sectors were not enough to replace them.

The weakened economic state has also impacted the high rates of food insecurity in rural Arkansas.

Food insecurity is the lack of access to or inability to acquire the food needed for adequate nutrition.

Food insecurity is a major problem for low income Arkansans, especially children. One in four children were food insecure in Arkansas in 2014.

One of the underlying issues of the high food insecurity rates is the lack of proximity to food since the Great Recession.

As the economic base of rural Arkansas began to change since the economic downturn, grocery stores closed creating food deserts. Food deserts are areas with little or no places to purchase food.

Most of those who are food insecure are those that are just above the federal poverty line. For a family of four, the poverty line is $24,600. They work, but the jobs don’t pay enough to feed an employee and their dependents.

Rural communities have started initiatives to help combat the problem, like food banks and using food stamps at farmer’s markets, that have been successful on a small scale, but can’t solve the problem entirely because of the underlying issues, said Moon.

The report also illustrated that access to healthcare is another major issue in rural Arkansas.

“In some counties, we don’t even have a dentist,” said Moon.

This is a major concern for rural Arkansas where a significant portion of the population – 18.8 percent—is 65 years or older, the age group most at risk for age-related illnesses and in need of specialists.

Miller said the first step in solving some of these issues in rural Arkansas is to reinvigorate the economy.

“We need to help rural areas and rural leaders revitalize their economic base,” said Miller.

The University of Arkansas System Division of Agriculture has community development programs to help rural communities identify their strengths and weaknesses and how to best go about economic revitalization.

The 2017 Rural Profile points out many struggles plaguing rural Arkansas, but Moon said to remember that Arkansans can rectify the issues they are currently facing, and have done so in the past.

“While we have some problems we really need to work on, Arkansans have a lot of what we social scientists call agency—the ability to pick yourself up by your boot straps and solve your problems,” said Moon.

To get a copy of the “Rural Profile of Arkansas,” contact your local county extension office or visit, http://www.uaex.uada.edu/publications/pdf/MP541.pdf.

To learn more about the University of Arkansas System Division of Agriculture’s community development program contact Wayne Miller at 501-671-2085.