By Mary Hightower
U of A System Division of Agriculture
Dec. 15, 2017

STUTTGART, Ark. – A growing season of drought, flood and do-overs may still result in the fourth highest state average yield on record for Arkansas’ rice growers, the nation’s top producer of that commodity. 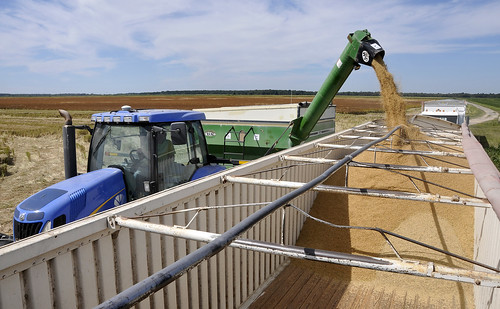 Jarrod Hardke, extension rice agronomist for the University of Arkansas System Division of Agriculture, said that this “growing season was a mixed bag.”

“Our planting progress was the second-fastest on record behind 2012 but was followed by severe flooding affecting hundreds of thousands of acres in late April and early May,” he said. “As a result of this flooding, some fields were lost and had to be replanted, while others lost levees that had to be re-pulled, resulting in loss of production on levees.”

At that point, rice futures exploded even higher, said Scott Stiles, extension economist for the Division of Agriculture.

“The closely followed September contract made its lows for the year in the last week of April —trading as low as $9.65 per hundredweight,” he said. “By mid-September when the contract expired, it had touched $12.76 in its final week of trading. It was a phenomenal run. From the end of April, the September contract closed higher in 14 of the 20 weeks that followed.”

Continued rainfall throughout the spring and summer made timely fertilizer and herbicide applications difficult.

“At this point the USDA is optimistic growers will see higher prices for the 2017 crop,” Stiles said.

“Long-grain production is projected to be down 24 percent from last year on lower acreage,” he said. “Ending stocks are expected to tighten considerably from 31 million hundredweight in 2016 to 16.5 million by the end of 2017 marketing year.”

In its December supply/demand report, USDA’s average producer price for 2017 long-grain was projected at $12.10 per hundredweight or $5.45 per bushel.