By Mary Hightower
U of A System Division of Agriculture
Dec. 15, 2017

LITTLE ROCK – Arkansas grain producers found themselves dealing with fickle market forces in 2017, as grain sorghum and wheat acreage dropped sharply in the state, chiefly due to low commodity prices, while corn acreage and yields hit their fourth-highest totals. 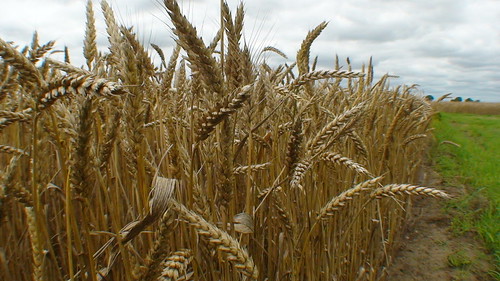 Jason Kelly, extension wheat and feed grains agronomist for the University of Arkansas System Division of Agriculture, said warm, dry weather early in the year helped growers get off to a “great start compared to the last few years. We were able to get planted early and had good stands, both are important to achieve high corn yields.

“The flooding in late April and early May did cause substantial damage and many acres of corn were lost, which were ultimately planted to soybeans,” he said.

“The growing season in May-July was cool, with ample rainfall fell for most growers and was conducive for high yield potential,” Kelley said. “Yields were excellent in many areas but varied in others, most likely due to too much rainfall.

“Late season tropical storms caused some lodging on later harvested corn that likely reduced the overall state average to some degree,” he said.

However, the positive news in the yield department belies a struggling corn market.

“The last five years have produced the five largest U.S. corn crops on record and production has outpaced demand,” said Scott Stiles, extension economist for the Division of Agriculture. “The U.S. corn market is now buried, you might say, under the largest ending stocks we've seen since the mid-1980s.”

For 2017, the U.S. Department of Agriculture expects corn ending stocks to increase modestly to 2.437 billion bushels; up 142 million from last year's 2.295 billion.

Stiles said that in the December supply/demand report, USDA pegged average producer prices to be slightly less for the 2017 crop at $3.20 per bushel and fall within a range of $2.85 to $3.55.

“In Arkansas, we're likely in the upper end of that price range for the portion of the 2017 crop that's already been marketed,” he said,

A significant portion of the state’s corn production can be stored on-farm now and marketed over wide window of time.

Grain sorghum acres continued a significant downturn that began in 2016.

There are several reasons why acreage dropped so low in 2017, “but low grain prices, the threat of sugarcane aphids, and the experiences with pre-harvest sprouting that led to unmarketable grain in 2016 all took a toll on acreage,” he said.

There is a silver lining though, Stiles said.

“With acreage and production dropping off this year, sorghum ending stocks are tightening,” he said “In response, 2017 producer prices will be a little better. The USDA is currently projecting an average producer price of $3.10 per bushel compared $2.79 last year.

“During our peak harvest month, Mississippi River bids averaged $3.34 per bushel,” Stiles said.  “Given that, we might top the U.S. average.”

“Wheat acres were also down, a function of low grain prices in comparison to other crops that could be planted,” Kelley said.

“Nationally winter wheat acreage declined more than 3 million acres in 2017 compared to the previous years as other crops, particularly corn and soybean had a greater profit potential,” he said.

“The majority of our wheat tends to be marketed at harvest,” he said. “Fortunately, we saw wheat prices move sharply higher during the month of June this year, and in fact, July '17 futures rallied about $1.50 in its final month before expiration.”

Stiles said there were opportunities to price wheat at or above $5 per bushel during harvest.  However, “I don't think we'll average $5 for the 2017 crop, but we could top last year's state average price of $4.66,” he said, “but it’s too early to say.”