By Fred Miller  fmiller@uark.edu
U of A System Division of Agriculture
Dec. 15, 2017

FAYETTEVILLE, Ark. — Despite a rocky start, the Arkansas cotton harvest appears poised for a record outcome. 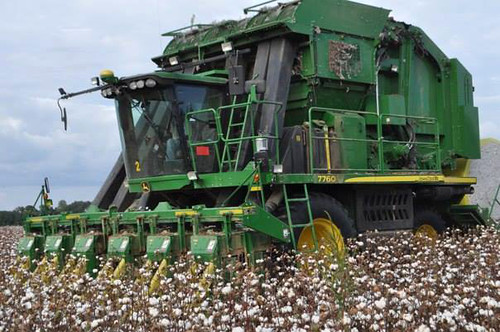 Overall, the USDA National Agricultural Statistics Service forecasts Arkansas cotton yields at 1.06 million bales in November, up 220,000 bales from a year earlier. That averages to 1,162 pounds of cotton per harvested acre, 87 pounds above 2016.

Robertson said heavy rains kept tractors out of the fields during the heart of Arkansas’ cotton planting season from late April through early May. Some growers had their cotton planted before the rains drove them out of the fields, and then those early fields were hit hard by weeks of wet weather.

Growers who planted late, after fields dried out, started out behind the calendar, but well-timed late rains gave them a boost, Robertson said.

“At the end of most years, early cotton has generally been better because it took advantage of spring rains,” Robertson said. “But the last two years, the late cotton caught the timely rains, especially in northeastern counties.”

Robertson said cotton yields north of Interstate 40 have been high while yields south of there were average to a little better than average.

All that cotton will likely have the state’s gins running until about Christmas, Robertson said. Ginning was finished by Dec. 1 in 2016.