By Ryan McGeeney
U of A System Division of Agriculture
Dec. 15, 2017

LITTLE ROCK – Like many of the state’s commodities, Arkansas forages were hit hard by the whims of 2017’s weather cycles. The extraordinarily wet summer, followed by one of the driest autumns in the state’s history, have made for a one-two punch that may put Arkansas cattle producers in need of supplemental feed and nutrition for their lots by late winter. 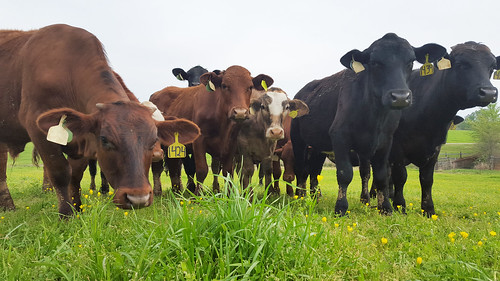 “It’s been a contrasting year of seasons, for sure,” said John Jennings, professor and forage extension specialist for the University of Arkansas System Division of Agriculture.

After a mild winter in 2016-2017, many in the state expected Arkansas forages to “green up” quickly, although it was slow in coming, Jennings said. The spring turned out to be good for cool-season grasses such as ryegrass, fescue and clovers, with clover persisting into the summer. Bermudagrass was slow to grow, given the relatively cool summer temperatures.

“And then we started getting rain, more rain and more rain,” Jennings said. Whether it was falling or simply threatening to at any hour, the rain delayed the hay harvest, causing much of the grass to mature to the point of nutrient loss.

In mid-August, the rains simply “shut off,” Jennings said.

“We went from a wet summer to one of the worst fall droughts we’ve had in recent memory,” he said. “The last three years have been dry, but this has been the driest.”

Jennings said stockpile pastures developed poorly, and winter annuals such as ryegrass were either not planted or planted very late in some cases.

“A lot of of producers that normally plant the winter forages did not plant them, because it’s so dry, or they delayed planting until very late,” he said. “So that forage wasn’t there for grazing in the fall.”

Many cattle producers began feeding hay as early as late September, about two months earlier than in a more typical year. Growers may be looking at dwindling hay supplies by mid-winter, Jennings said.

“That’s really going to have a potential impact, depending on how cold this winter is, and when spring green-up finally comes,” he said. “A dry fall has more of an impact on our annual grazing cycle than does a dry summer.”

Currently, nearly 100 percent of Arkansas is in drought condition, according to the U.S. Drought Monitor at the University of Nebraska-Lincoln, with more than a third of the state’s 75 counties in extreme drought conditions.

While this may begin affecting Arkansas cattle growers next year, 2017 proved profitable. Shane Gadberry, Professor of Ruminant Nutrition with the Division of Agriculture, said the mild winter of early 2017 helped growers carry over existing hay stock, helping cattle to make it through the summer in very good body condition, overall.

“With our forage supply, we’ve been able to maintain and even grow our cow inventory,” Gadberry said. “But despite a growing inventory, cattle markets have remained strong. In general, cattle prices have held their value going into the fall, compared to the same period in 2016.”

2017 sales of feeder steers weighing 400-500 lbs. averaged $154/cwt in September through November, an increase of 22 percent over the same period last year.

And while sale prices have been strong, feed prices have remained steady, helping to bolster producers’ bottom lines. Corn prices for September 2017 were about the same as September 2016, and dried distillers’ grain was $6/ton cheaper in September 2017 than it was the previous year.

To learn about forage and cattle production in Arkansas, contact your local Cooperative Extension Service agent or visit www.uaex.uada.edu.