By Fred Miller
U of A System Division of Agriculture
Dec. 1, 2017

FAYETTEVILLE, Ark. — Don’t cast away that cigarette butt. Cast a vote instead.

The conspicuous yellow containers placed in public areas ask tobacco users to vote on random opinion polls by disposing of their cigarette butts in one of two slots that indicate their responses. Windows show the level of butts in each receptacle to reveal which way the vote is going. 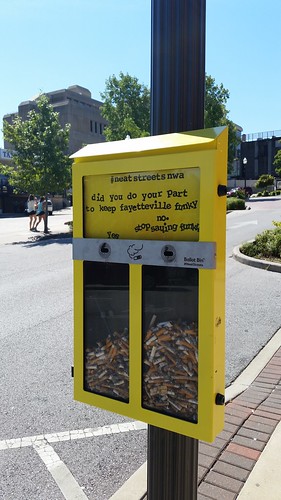 “Cigarette butts are the most littered item in the United States,” Massey said. He cited a Keep America Beautiful report that shows 32 percent of litter found in storm drains is tobacco waste.

The cottony fibers in cigarette filters are actually a form of plastic called cellulose acetate, Massey said, and are slow to decay. Depending on environmental conditions where a butt is discarded, it can take 18 months to 10 years for a cigarette filter to decompose, according to information from Clean Virginia Waterways.

Studies conducted by Clean Virginia Waterways show that toxic chemicals leach out of cigarette butts. In one test, a single cigarette butt in a bucket of stream water killed all the water fleas in it. The research also showed that the toxins leaching out of remnant tobacco bits on discarded filters are deadlier than all the contaminants in the filters.

Massey, a water quality extension agent for the University of Arkansas System Division of Agriculture, was already conducting a storm drain infrastructure demonstration project funded by a $248,467 grant from the Environmental Protection Agency awarded through the Arkansas Natural Resources Commission.

The grant was awarded for non-point source pollution prevention and education. Massey was using it to install and monitor filters in Fayetteville storm drains and was noticing the abundance of cigarette butts trapped after rains.

Massey also helped with a University of Arkansas student volunteer urban cleanup project in 2016 in which 11 pounds of cigarette butts were collected in about an hour. Given that a cigarette filter weighs .12 ounces, according to Keep America Beautiful, that works out to more than 1,400 cigarette butts collected in a single hour.

The same project in 2017 collected 13 pounds of cigarette filters, so … do the math.

Based on collections from storm drain filters, Massey said those butts are ending up in local streams and lakes. “We can demonstrate a direct connection,” he said.

Massey decided to find a way to keep some of that cigarette litter off the streets and also demonstrate the issue to the public, a project that was consistent with the grant he was already using. An internet search found a lot of projects around the U.S. that collected the butts, but were designed to be inconspicuous.

A broader search found the cigarette butt ballot bins that are provided by Hubbub Foundation of the United Kingdom, a non-profit organization that creates environmental campaigns for social impact.

Massey said he worked with the City of Fayetteville Office for Sustainability and Resilience, Parks and Recreation, Parking and Transportation and Solid Waste and Recycling to implement the pilot project.

It began with two butt ballot bins installed in Fayetteville’s Dickson Street entertainment district in the fall of 2016. Massey said those two bins collected 650 and 1,000 tobacco filters and waste.

Fayetteville businesses are responsible for keeping the sidewalks clean in front of their restaurants, bars and shops. Massey said they began contacting him about getting more of the butt ballot bins installed.

There are now seven of the bins installed on Dickson Street and downtown Fayetteville, and at least three more requests for installations.

Business owners who use the butt ballot bins tell Massey they have less tobacco waste to clean up. “It definitely helps raise awareness,” he said.

Massey said all the tobacco waste is recycled by a local cigarette butt recycling brigade by TerraCycle, Inc., at no cost or shipping fees. The cottony fibers in cigarette filters are actually plastic and are recycled by a New Jersey company into products like pallets and park benches.

A key to success, Masseys said, is to change the poll questions frequently. At least once a month works, he said, but every two weeks is better. And questions about local issues or pop culture are most successful, he said.

Massey and local businesses have been sharing the poll results on social media, he said. They can be tracked on Massey’s Twitter account, @cleanWaterNWA, and by the hashtags, #neatstreetsnwa, #preventlitter or #BallotBin.

“It’s a good educational tool, and is helping keep cigarette butts off the ground,” Massey said.

The ANRC grant will expire by the end of 2018, but Massey hopes Fayetteville businesses or organizations will keep using the cigarette butt ballot bins. And if other communities pick up the program, so much the better.