By Ryan McGeeney
U of A System Division of Agriculture
Dec. 1, 2017

LITTLE ROCK – It’s an uphill battle to prevent and reduce obesity in Arkansas, one of the nation’s most afflicted state, but communities in each of Arkansas’ 75 counties are fighting it every day. 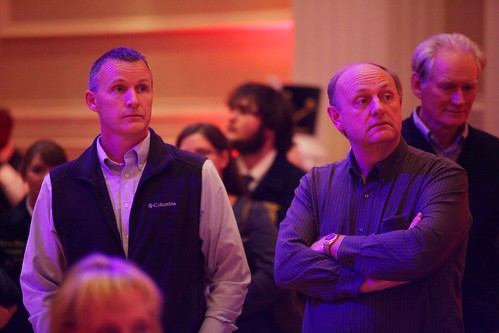 Many of those communities were recognized Thursday, during the Arkansas Coalition for Obesity Prevention’s 10-year celebration, held at the Arkansas Governor’s Mansion in Little Rock.

Katrina Betancourt, the coalition’s president, told the several hundred people in attendance that their respective efforts to help prevent obesity over the last decade had already had a profound effect on the state’s population.

“Our communities are healthier because of what you do,” Betancourt said.

The coalition uses three tiers of recognition in documenting efforts on the part of communities: emerging, blossoming and thriving. Among those recognized Thursday was the City of Rison, recognized as “blossoming,” and surrounding Cleveland County, recognized as “thriving.”

Much of Cleveland County’s obesity-fighting efforts are tied to Kickstart Cleveland County, a broad-spectrum community and economic development effort supported in part by the University of Arkansas System Division of Agriculture.

The Division of Agriculture has worked to help reduce and prevent obesity in Arkansas through multiple fronts over the years, including participating in U.S. Centers for Disease Control-funded programs and regular outreach through Family and Consumer Science extension agents. Establishing walking trails, farm-to-school produce chains and farmers’ markets are some of the most successful tools promoted through the Division of Agriculture’s efforts.

Rex Nelson, senior vice president of Simmons First National Corporation and long-time Little Rock resident, spoke to those in attendance, noting that the health of a state’s population often has a direct effect on its fortunes.

“I’m talking to a group of economic developers,” Nelson said, addressing the crowd. “You may not think of yourselves that way, but you are.

“Arkansas will never meet her full potential until we do more to improve the health of those people who proudly call themselves Arkansans,” he said.

To learn more about the Arkansas Coalition to Prevent Obesity, visit http://arkansasobesity.org/.

To learn about the Division of Agriculture’s efforts to support healthier communities, contact your local Cooperative Extension Service agent or visit www.uaex.uada.edu.