(Newsrooms – with downloadable file art at www.flickr.com/photos/uacescomm/albums/72157685776740344 - This album may be updated as Harvey reaches Arkansas)

Predicting the northward motion of the storm’s residual low has proven tricky business, but Arkansas farmers didn’t wait on an exact time and place for Harvey’s arrival, many getting their harvesting equipment in the field late last week as the storm headed for landfall in Rockport, Texas.

In southwest Arkansas, it’s been neighbor helping neighbor in the calm before the storm. 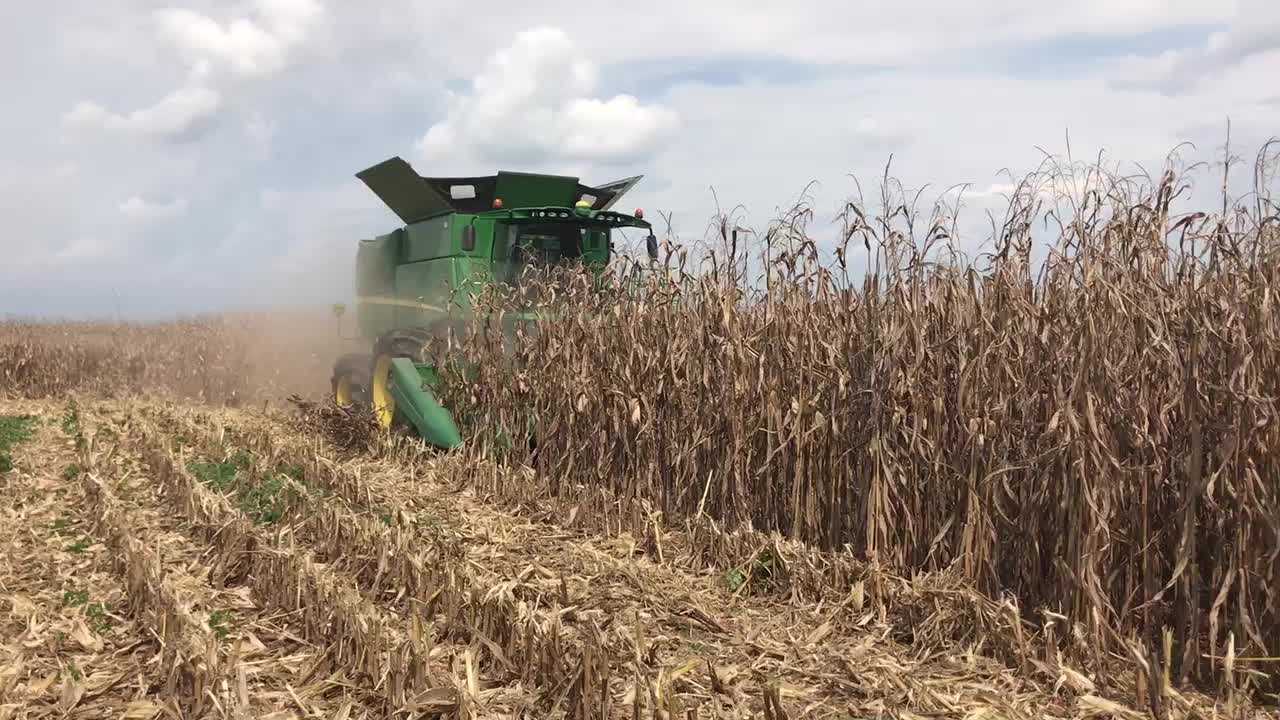 HARVEST -- Harvesting corn verification field in the Arkansas River Valley on Monday, Aug. 28, 2017, ahead of the anticipated arrival of the remnants of Hurricane Harvey. (U of A System Division of Agriculture video by Kevin Lawson)

“We’ve been working day and night,” Lafayette County farmer Tim Spruell said on Monday. “I had one of my neighbors help me. I lacked about 100 acres and he came yesterday with one of his machines. I had two and we got it knocked out.”

“It’s a good feeling to wake up this morning and know everything is in the bin,” he said. “We harvested a lot of high-moisture corn and have fans blowing to try and dry it down. We didn’t have a choice. We had to go.”

“All in all, we’re in pretty good shape,” Spruell said. He still had some soybeans in the field that were not quite ready for harvest. As long as the storm “doesn’t linger and we don’t have a lot of wind,” he said he expected the beans to hold their own.

Dylan Brackman, also of Lafayette County, was one who jumped in the fields at the earliest opportunity. “I got wrapped up on Friday and helped a neighbor finish up.”

“Farmers here have been running hard to beat the weather to finish their corn harvest,” said Amanda Greer, Lafayette County extension staff chair for the University of Arkansas System Division of Agriculture. “In the last few days many in the area have been running all night.

“We were lucky that it has moved so slow and that gave us a few more days than we expected last week,” she said.

The cone forecast by the National Hurricane Center has changed frequently, but by Tuesday afternoon, the center of the low appeared to be on a track to take it east of the Mississippi River Thursday into Friday and turn toward West Virginia by Sunday morning.

Wet beginning, wet end?
For farmers in northeastern Arkansas, Harvey’s rainfall could provide a wet bookend to a season in which many farmers had to start over due to flooding and heavy rain in April and May. As of Tuesday afternoon, the 120-hour precipitation forecast called for parts of the Arkansas Delta to see up to 10 inches of rain into the Labor Day weekend. (see: http://www.nhc.noaa.gov/refresh/graphics_at4+shtml/152545.shtml?rainqpf#contents )

When the rain does come, it will bring with it headaches for each commodity: germination in grains, boll rot and boll lock in cotton and “lodging,” when the crops fall over.

In rice, “once this begins in even a small area of a field, the domino effect then comes into play where more and more rice lodges over time,” said Jarrod Hardke, extension rice agronomist for the Division of Agriculture. “Lodged rice generally increases the time needed to harvest and results in lost grain yield and milling yield.

“Even when lodging or heavy rainfall don't occur, sustained periods of rainy weather when rice is ready for harvest can result in reduced milling yields and possibly kernels sprouting in the field,” he said.

Chad Norton, extension soybean and wheat verification coordinator for the University of Arkansas System Division of Agriculture, said that “any further rainfall in southeastern Arkansas will worsen the soybean quality. We're already running anywhere from 4-12 percent damage from earlier rains in harvested early planted soybeans and producers are taking a pretty good lick at elevators now.”

Not just a row crop concern
“We also have horticulture crops going in such as strawberries which will be impacted,” said Matthew Davis, Jackson County extension agent for the Division of Agriculture. “Agritourism will be impacted to as we get ready to harvest pumpkins and open corn mazes in the area.”

Amanda McWhirt, extension horticulture crops specialist for the Division of Agriculture said that “muscadines are coming off in some parts of the state and heavy rain can affect quality” causing fruit to split, have lower sugar content or be more susceptible to fungi.

“Pumpkins are ripening up in the fields and flooding could kill vines and hurt those coming off,” she said. “Strawberry growers are in the process of laying beds to plant in September and wet fields will delay them a bit.”

Vic Ford, interim associate director-agriculture and natural resources for the extension service, said that “fall calving will be difficult in wet conditions” and while “wet weather makes for a good hay crop, it makes it difficult to make hay.” He also expected forest harvesting will grind to a halt, “putting pressure on mills for procuring wood and loggers to make payments.”