By Ryan McGeeney
U of A System Division of Agriculture
Aug. 25, 2017

MONTICELLO, Ark. – Researchers with the University of Arkansas System Division of Agriculture are working to identify genetic markers that can help cattle producers identify the best bang for their buck when choosing breeds and budgeting for feed. 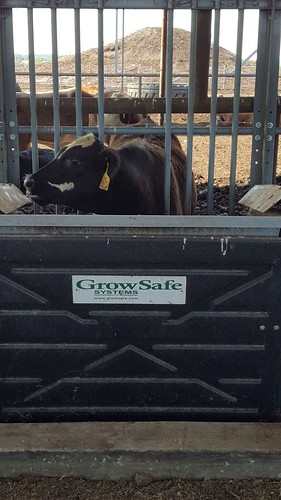 Kelly Bryant, Director of the Division of Agriculture’s Southeast Research and Extension Center, and several members of his research team and staff from Beefmaster Breeders United are monitoring offspring from the SEREC herd of Beefmaster heritage lines in an effort to determine if feed conversion efficiency is an inheritable trait.

“From the time they’re weaned until the time they’re either ready for slaughter or ready to deliver a calf, they’re in a growth stage,” Bryant said. “It’s all done through either grass or grain — some can just gain more weight on less feed than others. It makes it cheaper. Gain is what we’re after, and if we can do it on less feed, then we’ve got less money in them.”

If specific genetic markers tied to that higher efficiency can be identified and isolated, and are found to be inheritable, growers could potentially improve the conversion efficiency of entire herds over time by introducing Beefmaster genetics into their breeding operations.

On Aug. 5, Bryant and his research staff took possession of 31 heifers that had spent the previous 60 days at a Grow Safe facility in Texas.

“The Grow Safe systems tracks animal feed intake and weight gain, allowing us to measure feed conversion efficiency for each animal,” Bryant said. “With this information we hope to determine if feed efficiency is inheritable.”

The research project, which is expected to last at least three to five years, is being funded in part by Beefmaster Breeders United, a trade association of cattle producers who both maintain purebred Beefmaster cows and use the cattle for commercial crossbreeding, Bryant said.

Bryant said cows in the herd maintained at SEREC typically calve in September or October. Females are typically bred no earlier than 15 months old, calving when they are about two years old, and generally calve once a year after that.