By Ryan McGeeney
U of A System Division of Agriculture
Aug. 22, 2017

ST. JOSEPH, Mich. – An award named for a University of Arkansas System Division of Agriculture professor and his wife has been presented for the first time. 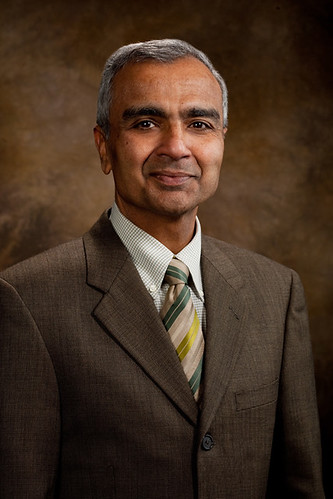 The Lalit and Aruna Verma Award for Excellence in Global Engagement is an eponymously named award recognizing “outstanding contributions made toward global advancement and recognition of the profession of agricultural and biological engineering, and excellence in global engagement and international education, outreach, and research,” according to information from the American Society of Agricultural and Biological Engineers. Lalit Verma, head of the Agricultural and Biological Engineering department at the University of Arkansas Fayetteville, is a former president and Fellow of the society.

The award’s inaugural recipient is Bill A. Stout, an agricultural engineer who has been a member of the ASABE for 62 years. In 1980, the society named him a Fellow.

Stout received the award “for 50 years of sustained contributions to the profession through a variety of international assignments and endeavors,” according to information from the society. It was awarded in July during the association’s annual international meeting, held in Spokane, Washington. According to Stout’s biography, he has “focused on renewable energy as a means of limiting global pollution.”

Dr. Clarence Watson, Jr., director of the Arkansas Agricultural Experiment Station, said the award reflected not only on the work of the recipient, but on the intentions of the progenitors as well.

“This award recognizes the Verma’s lifelong commitment to global engagement and the engineering profession and the potential for improving livelihoods in countries outside the United States,” Watson said.

Among other things, Verma is known for his instrumental role in organizing the Engineering and Technology Innovation for Global Food Security Conference, held last October in South Africa. The conference marked the ASABE’s first action as part of the Global Engagement Initiative. The conference was co-sponsored by the Division of Agriculture, the College of Engineering and other institutions, and co-hosted by Stellenbosch University in South Africa. The next meeting of the Global Engagement Initiative, which will meet biennially, is scheduled for October 2018, and will focus on water security.