By Meleah Perez
U of A System Division of Agriculture
Aug. 14, 2017

HOT SPRINGS, Ark. — Behind the pale walls and barred windows of the Garland County Detention Center sits a green garden. A sign anchored in the soil, standing above the plants reads: “The Teaching Garden.” 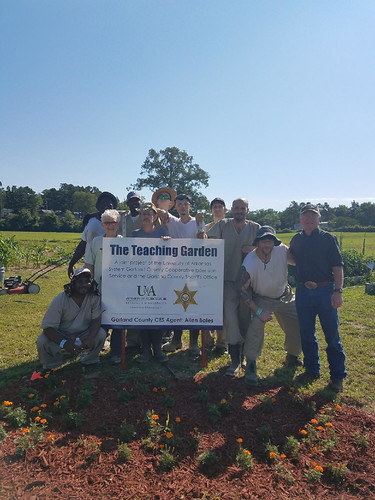 The idea behind the teaching garden, a joint project between the Garland County Sheriff’s Department and the University of Arkansas System Cooperative Extension Service, is to provide inmates with leadership responsibility, teamwork and marketable skills while they serve their respective sentences.

The vision came to Capt. Belinda Cosgrove, director of operations at the Garland County Detention Center in Hot Springs, two years ago, when she visited other correctional facilities that had gardens.

Cosgrove said she thought the garden would be a good way to produce fresh food while helping inmates gain skills they could use in after they have served their sentences. The Garland County Detention Center has 52 acres of land, ample space for a garden.

After the class phase, Bates’s classes move to the center’s outdoor garden, where he, the outside-inmate workers — inmates allowed to work outdoors on various projects — and Sue Hale, a volunteer, plant summer crops. They all work in the garden at least once a week, sometimes twice if needed.

Outside-inmate workers have the lowest level of custody, and who are often incarcerated while paying off fines, Cosgrove said. An inmate’s custody level is determined by factors including the severity of offense, length of sentence, characteristics of sentence, criminal history and behavior.

About 10-15 workers are in the garden at a time, and they harvest twice a week, either donating the produce to charity or using it to prepare meals at the detention center, Hale said.

As an educator, Bates said the work is rewarding, but one of the main reasons he took on the project is because of Hale.

Mrs. Sue, as the inmates call her, is a retired public school educator. She came to the detention center to volunteer at the same time as Bates. The two, while both a part of the Garland County Master Gardener program, had never met until Cosgrove brought them together.

Hale offered to gather the supplies, set up the work days and contact the detention center weekly if Bates would supply the training and advising, Bates said.

“She has never missed one week of this project, contacting me and setting up the work day,” he said. “At the end of each day she always has water and a snack for each worker, including myself.”

Hale made zucchini bread from some of the produce they grew together, and the workers loved it and have requested it again, Bates said.

“This project would never have happened or been a success without Sue Hale. She is truly a Godsend,” Bates said.

Bates also said the project would not have been possible without Sheriff Mike McCormick, who is over the entire detention center.

The volunteers have influenced the inmates too.

After the inmates have served their sentences, the detention center sends them an information packet about gardening and all the services Extension offers as well as a letter of recognition, Hale said. The letter outlines that the worker participated in the program and took on responsibilities, such as showing respect for authority and initiating work, Hale said.

The crops that are planted in the garden now will last until September or October, Cosgrove said. After that, they will plant cool-season crops. Officials are also considering expanding the size of the garden because of the success of the project, Cosgrove said.

“It’s been a very successful project, and it’s grown from last year, so we expect it to grow from this year,” Cosgrove said.