By Ryan McGeeney
U of A System Division of Agriculture
Aug. 11, 2017

STUTTGART, Ark. – After a tumultuous spring, in which rains and flooding upended more than 10 percent of total rice acreage throughout Arkansas, swallowing sunk input costs and costing the state an estimated $175 million in crop losses, the nation’s No. 1 rice producer is slowly moving toward harvest. 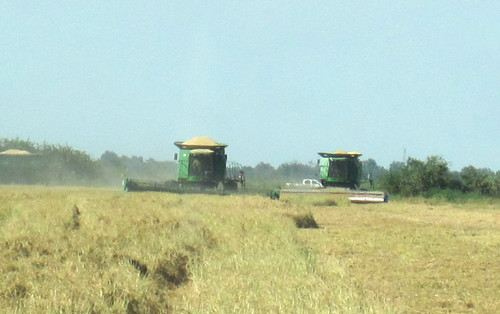 Jarrod Hardke, extension rice agronomist for the University of Arkansas System Division of Agriculture, said the trend in recent years toward early planting has caused rice combines to appear in fields a little earlier each August, although relatively cool summer temperatures and recent rains have delayed the process for many in eastern Arkansas.

“We had some people start last week, which is definitely early,” Hardke said. “2012 is the barometer for early planning progress — it stands as the record, and we actually had some rice harvested in July that year.

“There was probably some potential for that this year, but the temperatures just didn’t stay high enough, so the crop didn’t quite progress as fast,” he said. “We didn’t have anywhere near the heat necessary for that.”

Rice harvest typically begins in the middle of August, Hardke said, with the “heart” of the harvest occurring on or around Sept. 1. While the state hasn’t suffered another deluge like those in the spring, intermittent rains in July and August may push many harvesting operations to the latter weeks of this month.

“We’re actually waiting for it to dry out to the point where we can take an accurate moisture sample in research trials,” Hardke said. “We have dew from the night before not drying out until some time after lunch each day. “We need the temperatures to rise a little and have some sunshine to dry the rice out before we can really get rolling on the harvest. So far, that’s not really happening. You see the occasional combine running, but I’m not getting word of much running this week.”

A sunny streak doesn’t seem to be in the cards. The National Weather Service at Little Rock is forecasting at least a 30 percent chance of rain through next Wednesday.