By Fred Miller
U of A System Division of Agriculture
Aug. 9, 2017

CLARKSVILLE, Ark. — Unusually mild temperatures in June and much of July yielded a bonus in the primocane blackberry plots at the University of Arkansas System Division of Agriculture’s Fruit Research Station. 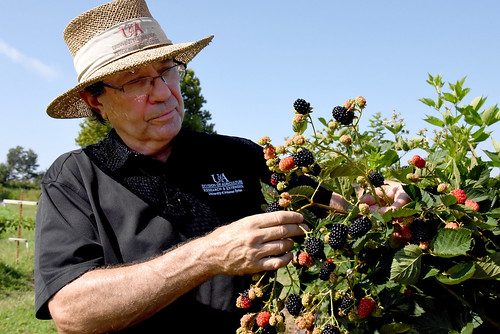 Primocanes are blackberry canes that grow to maturity during their first year. In most blackberry plants, primocanes do not flower or produce fruit. The following year, when they are called floricanes, those branches flower, produce fruit and then die.

Primocane fruiting blackberries flower and fruit on those first year canes, though normally at a later date than the plants’ floricanes. 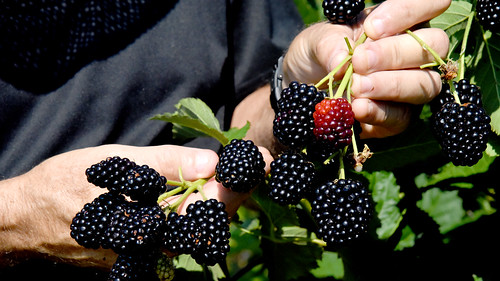 “This offers a second crop on the plants,” Clark said, “and can extend production potentially all the way until frost.”

Normally, Clark said, heat is an impediment to the expression of the primocane-fruiting trait. “When temperatures are 90 degrees or above for many consecutive days, this can be a major problem.”

When such high temperatures occur for several consecutive days, as is common in Arkansas in late June, July and August, it results in smaller berries, interferes with fruit set during blooming and can even interrupt bud formation, Clark said. When tempertures exceed 100 degrees for several days, primocane fruiting may cease.

Clark noted that primocanes whose fruiting is shut down by heat will come back with excellent yields as floricanes the following year. “Prime-Ark 45®, for example, can have exceptional floricane berry yields that ripen early, similar to Natchez, with good flavor and quality,” he said.

But unexpectedly low temperatures in June and July, when the primocanes were forming buds and setting fruit, boosted berry production in the division’s Prime-Ark blackberries at the Fruit Research Station.

“Prime-Ark 45®, for example, normally produces a few blackberries in Arkansas, but much less than the floricane crop,” Clark said.

But this year, there were no days above 90 degrees in June and only 15 of 31 days in July with temperatures above 90, and those were only in the lower 90s. “So this allowed greater expression of the primocane trait,” Clark said.

On that day, there was already an abundant crop and more berries were still forming. “This will continue on for some time,” Clark said. He noted that more recent high temperatures were reducing the size of new berries that are forming.

Clark showed how excellent blackberries also formed on Prime-Ark Freedom® and Prime-Ark Traveler® because of the cooler temperatures in June and July.

While this Arkansas primocane bonus was unexpected, Clark said, the Prime-Ark® primocanes typically produce even more abundantly in cooler climates like parts of coastal California.

Clark continues to work on breeding for heat tolerance, as well as other quality traits, as he advancing promising breeding selections toward new, improved varieties.