By Emily Thompson
U of A System Division of Agriculture
Aug. 4, 2017 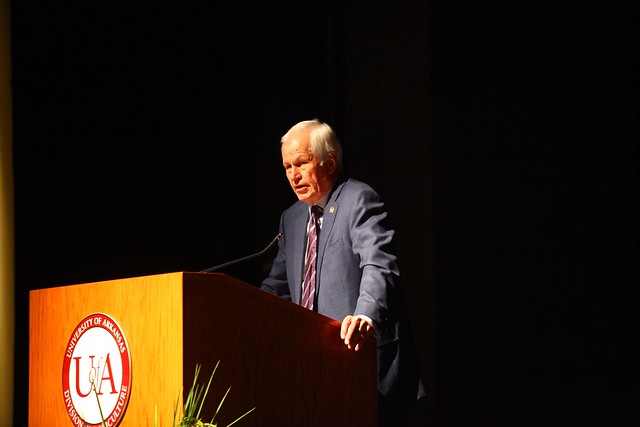 “We had a good crowd and were very pleased at the numbers who attended Rice College and took part in the tour of the research plots at the Rice Research and Extension Center,” said Mark Cochran, vice president-agriculture for the University of Arkansas System. “It was good to see such a large cross-section of people here.”

“Today’s political system is absolutely broken,” Stenholm said, adding that too many in Congress believe compromise is a “four-letter word,” and that compromise is the only way to pass a bill.

The former congressional representative spoke about his 26-year run in politics as a time when members from across the aisle came together to pass important legislation. In his years since leaving Congress, Stenholm has been teaching at Tarleton State University and lobbying.

The current political division is one of the culprits of the Farm Bill stalemate, he said.

When asked by the audience what he thought the future holds for the Farm Bill, Stenholm said keeping the nutrition portion of the bill is key to its passage.

Harrison Pittman, director of the National Agricultural Law Center, discussed current legal and legislative issues in agriculture, among them, the Farm Bill.

“There’s still a lot of alligators in the water on the 2018 Farm Bill,” he said. “There are active efforts to split the two parts of the Farm Bill – agricultural from the SNAP programs, and that’s traditionally the coalition that gets the bill over the line.”

Ag and the law

There’s no shortage of issues for the National Agricultural Law Center to consider.

“Usually, I get up around 5 a.m. and read for about three hours” to get up to speed on what’s going on around the country, Pittman said, speaking to a small breakout session at the 2017 Arkansas Rice Expo.

“When you look at the various environmental and other interest groups filing legal action, it’s as though someone put a battle plan on the wall,” he said. “They’ve got every supply line into agriculture; crop insurance, loans, regulation under the Clean Water Act; virtually everything that goes into agriculture is under attack in some way, or there’s some serious proposal to augment or change how production agriculture is conducted and regulated.”

And none of this action stays under a bushel, he said.

“What happens in Vermont, does it say in Vermont? Does what happens in Des Moines stay in Des Moines? No,” Pittman said. “We used to think of California’s impact on the national scene, because they’re so big and have such a powerful economy – which is still true – but now, someplace as small as Vermont can have ripple effects, too.”

He cited Vermont’s passage of laws on food labeling that “forced a Congress and White House that had been fighting like cats and dogs to work together on something.”

Alexa Lawson May, St. Francis County Rice Queen, was handing out samples of her grandmother’s chicken and rice dish. She said the Rice Expo was, for her, a chance to connect.

"I'm really excited to meet the others. Friendship is so important amongst queens,” she said. “Even if I don't win Miss Arkansas RIce, I know the friendships I make will last a lifetime."

While many of the expo events take place at the Grand Prairie Center each year, the expo also hosts field tours at the Rice Research and Extension Center.

Several growers in attendance said they came to “up their growing game.” Joe Christian, Arkansas Rice Promotion Board member and a rice farmer himself, said he was eager to learn anything to help him with his rice.

The Arkansas Rice Expo began in 2011, growing out of an annual field day for rice producers. The event expanded from the Rice Research and Extension Center to include the Grand Prairie Center, which hosts more than 100 booths with family activities, seminars and demonstrations that showcase the broad range of expertise within the University of Arkansas System Division of Agriculture.

For more information about rice production contact your county extension office or visit www.uaex.uada.edu or http://arkansascrops.com.