By Ryan McGeeney
U of A System Division of Agriculture
Aug. 4, 2017

LITTLE ROCK – The soybean harvest may still be more than two months out, but unseasonably cool temperatures could propel some growers in the state toward a very strong harvest in 2017. 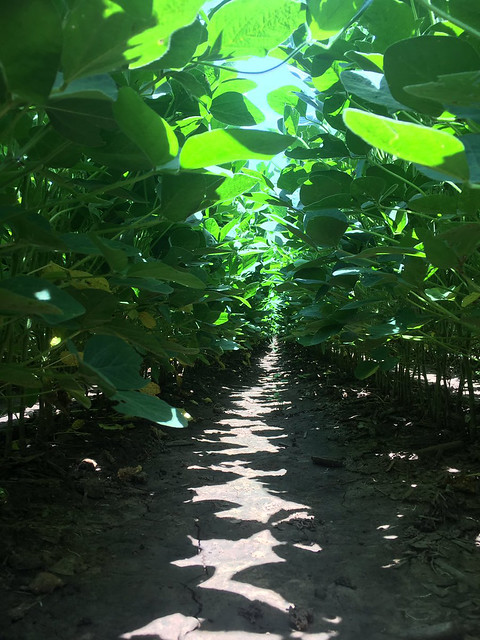 Jeremy Ross, extension soybean agronomist for the University of Arkansas System Division of Agriculture, said daytime high temperatures in the mid-80’s are likely to prove a boon to the state’s No. 1 crop over the next week.

“Eighty-six degrees is optimal for soybean growth and development,” Ross said. “And it doesn’t look like we’re going to get out of the mid- to upper-80’s. So as long as a crop isn’t stressed with something else — nutrient stress or disease stress, for example — we ought to finish out this crop pretty strong.”

According to forecasts from the National Oceanic and Atmospheric Administration, temperatures in Arkansas have a 50-60 percent probability of remaining below the annual average between now and Aug. 15.

Drying soils not an issue

Ross said daily temperatures are a more reliable bellwether for the 2017 soybean crop than soil moisture readings, which are falling for much of the Midwest as the summer approaches its peak. According to an Aug. 1 report from the U.S. Department of Agriculture’s National Agricultural Statistics Service, about half of Arkansas topsoil moisture supplies were “short” or “very short,” as were subsoil moisture readings.

Drought conditions are currently milder for Arkansans than some of their neighbors, according to data from the U.S Drought Monitor, maintained by the University of Nebraska-Lincoln. While about a third of counties in Missouri and Oklahoma find themselves in abnormally dry or moderate drought conditions, less than 1 percent of Arkansas acreage is even abnormally dry.

“It’s actually an improvement over some of our recent summers, if you discount 2016,” Ross said.

2016 was an unusual mixture of weather conditions, to be sure — during the first week of August, about 37 percent of Arkansas was under abnormally dry conditions, according to the drought monitor, while other areas of the state sat under saturated soils, resulting from 14 days of continuous rain.

By the final week of 2016, however, about three-quarters of the state was in abnormally dry or moderate drought conditions, and about 7 percent of acreage in severe drought, according to drought monitor data. But Ross said farming techniques commonly used in Arkansas have helped negate the impact of dry weather and soil for much of row-crop production in the state.

“We rely on a lot of irrigation in Arkansas, so I don’t get too worked up about topsoil moisture,” Ross said.

Full impact of dicamba drift still to be seen

Ross cautioned that overall average yield for the state is still an open question, as the full impact of off-target movement from off-label dicamba applications is still unknown. Since Monsanto released new dicamba-resistant seed technologies in late 2015, the Arkansas State Plant Board and similar institutions in neighboring states have received hundreds of complaints of drift injury, as some growers chose to use the herbicide in the absence of an authorized formulation, often damaging their neighbors’ soybean crops in the process.

In July, the Arkansas State Plant Board issued an emergency rule banning both the sale and use of dicamba products in Arkansas.

Ross said U.S. I-40, the interstate highway that bisects much of the state between north and south, may serve as a de facto demarcation line for the pesticide’s damage to soybeans in the state.

“The southern part of the state hasn’t had the issues with off-target movement, so the crop in the southern part of the state looks really strong,” he said. “We’re going to have some pretty good yields coming out of southern Arkansas. Once you get north of I-40, it’s still a big question about yield impact some of these off-taget movements are going to have. Additionally, in northeast Arkansas, a lot of those fields were delayed in planting, because of the flooding conditions in April and May.