By Mary Hightower
U of A System Division of Agriculture
Aug. 3, 2017 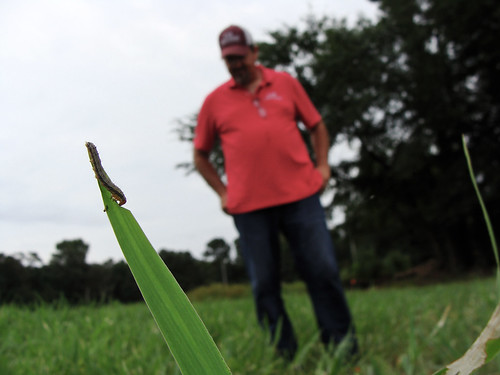 However, they can be managed, and that’s what Kelly Loftin, extension entomologist, and Hank Chaney, regional agricultural and natural resources specialist, have been working with Steven Stone, Lincoln County extension staff chair, all with the University of Arkansas System Division of Agriculture, have been eager to show in a pasture outside of Star City in southeastern Arkansas.

From afar, the differences are noticeable. Large patches of dark green bordering a patch of pasture that looks like it was still covered in dew or frost. Upon closer examination, the differences are stark. Patches were what’s left of the bermudagrass has been chewed to the dirt by two generations of fall armyworms. Caterpillars of all sizes stretched along remaining blades of other types of grass or were curled up in little O shapes in the dirt.

In another part, the Bermudagrass was green and growing. There were a handful of armyworm caterpillars – most were on the small side. Some were dying or already dead.

Loftin said by mid-June this year – even before summer started – fall armyworms were well above treatment threshold. They were appearing in mixed sizes, an indication of overlapping generations.

While pyrethroids, such as lambda-cyhalothrin, are effective and are frequently used to control fall armyworms in pastures and hay fields, they don’t have staying power.

Laco, owned by Alton Mitchell, is a family farm with poultry, hay and cattle.

“Mr. Mitchell called me when he found armyworms and was concerned about what product to use,” Stone said. Mitchell agreed to host a demonstration plot because “he was going to treat it anyway and was interested in seeing the results.”

Stone said Mitchell’s son-in-law told him they hadn’t had this problem 15 years ago and asked what changed. Stone said the Mitchells’ improved hay production practices made “their grass more attractive to the armyworms. A pasture full of weeds is not going to have an armyworm. The insects pick the best, most attractive grass and that’s where they lay their eggs.”

However, at 17 days post-treatment, the fall armyworms came back. The areas treated with Besiege averaged less than one worm per square foot, while populations crept up to almost nine worms per square foot in the generic pyrethroid areas.

“In this specific case, one spray application would have been eliminated by using a product with long residual activity,” Loftin said. “When choosing a treatment option to control fall armyworms in pasture, always consider the product cost per acre, the labor and fuel cost per acre, grazing and/or harvest restrictions and maturity of hay crop.

“The cost in labor and fuel, estimated at about $5, is often overlooked when choosing treatment options,” Loftin said. “Stay tuned - additional evaluations will be made at 28 days after treatment.”

For more information about pest management, contact your county extension office or visit http://arkansascrops.com or uaex.uada.edu.