By Ryan McGeeney
U of A System Division of Agriculture
April 21, 2017

(638 words)
(Download a MS Word version of this story here.)

BATESVILLE, Ark. – When it comes to raising livestock in Arkansas, one word commonly straddles the line between “friend” and “enemy”: fescue. 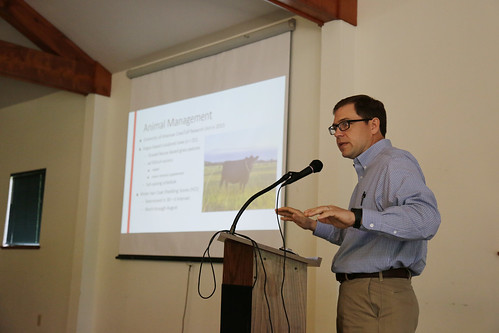 Specifically, the variety of fescue known as Kentucky-31 (or KY-31), originally released as a cultivar in 1943 and introduced to Arkansas shortly thereafter as a drought-resistant grazing grass. While the tall fescue has proven universally popular, covering more than 34 million acres throughout the southern plains and eastern states (including an estimated 2 million acres in Arkansas alone), the variety often offers specific challenges to livestock producers.

The grass often hosts an endophyte — a bacterium that is responsible both for its tendency to thrive with low inputs and a high drought tolerance, as well as a variety of health maladies in grazing cattle known as fescue toxicosis. For cattle producers in Arkansas and beyond, toxicosis can compromise the health of their herds, and complicate multiple stages of their operations.

In cattle, fescue toxicosis can lead to weight loss, poor reproductive capability and vasoconstriction that makes it harder to deal with heat. In colder months, the syndrome can lead to the loss of ear tips, tails and feet.

Seeking to address the widespread issue, agents and researchers at the University of Arkansas System Division of Agriculture’s Livestock and Forestry Research Station in Batesville recently hosted more than 60 producers, consultants and agents for its annual livestock field day.

The theme of the field day, “Is it fescue, or is it just me?” provided a light-hearted entre into a serious and complicated topic. A panel of more than a half-dozen speakers addressed topics ranging from the history of toxicosis (in both animals and humans, where fungi in rye grass caused ergot poisoning) to genomic strategies for improving fescue tolerance in cattle, to technologies that may help offset the effects of fescue toxicosis. 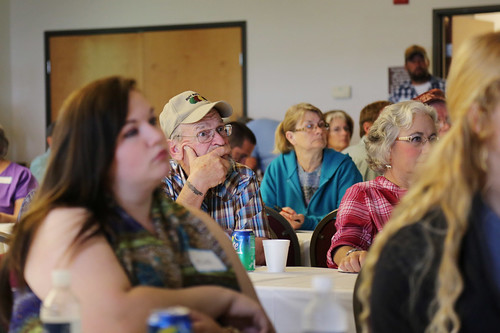 Don Hubbell, director of the Batesville research station, said this year’s event was designed to provide attendees with the knowledge and tools necessary to both fully comprehend the problem at hand, as well as to put together a strategy for overcoming it.

“The goal is for everyone to come away with some recommendations about how to deal with KY-31 fescue,” Hubbell said. “It’s the predominant forage in North Arkansas. Each presentation is geared to a different aspect of the production cycle, whether it’s developing heifers or weaning calves, or breeding cows back, or, if you’re retaining ownership, what happens to those cows that have lived on KY-31 when they get to the feedlot, and what those carcasses look like.”

Several of the producers in attendance said they were dealing with fescue toxicosis and its effects on a regular basis. Jeff Blake, who runs a 48-acre cow-calf operation near Harrison, said he has been discussing options with Boone County agricultural agent Mike McClintock for some time.

“I’ve been discussing re-seeding some of our fields with Mike, starting to transfer over to a novel fescue, so this particular meeting was incredibly valuable,” Blake said.

Blake, who relocated to Arkansas from Colorado about four years ago, said the effects of toxic fescue on an otherwise successful operation were both obvious and maddening.

“Toxicity has unquestionably affected weaning weights on my calves,” he said. “Because I’m a small producer, I pay particular attention to what’s going on — and maybe tend to pamper my animals a little bit. And I just don’t get the growth I should on my animals. My cows will do well, as far as a body condition score — but they’ll lose condition.”

The Annual Livestock Field Day is just one of a series of field day events organized by the Division of Agriculture to deliver the latest in unbiased scientific research and offer strategies to producers for dealing with real-world problems. To learn more about upcoming field days, contact your local Cooperative Extension Service Agent or visit www.uaex.uada.edu.