By Fred Miller
U of A System Division of Agriculture
April 7, 2017

(411 words)
(This story can be also be downloaded as a MS Word document here.)

Now is the time to prepare land for planting native grasses next year, said Dirk Philipp, forage researcher for the University of Arkansas System Division of Agriculture.

“If you want to establish native warm-season grasses on your land, now is the time to prepare for planting 12 months from now,” Philipp said. 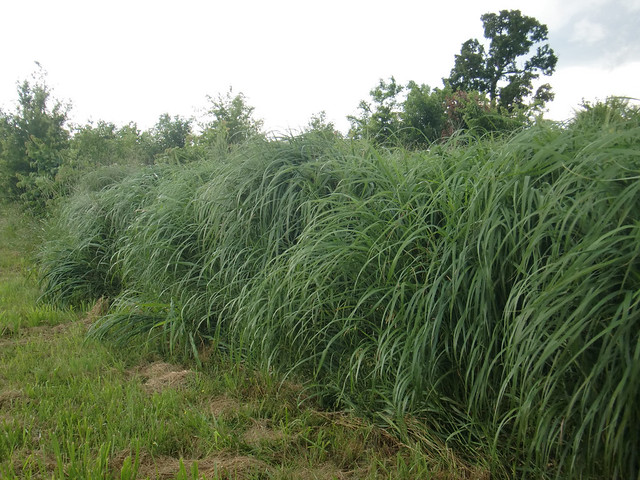 SWITCHGRASS -- Switchgrass is a native grass that helps fill a seasonal forage gap. Taken June 25, 2014, at the University of Arkansas Watershed Research and Education Center. (U of Arkansas System Division of Agriculture image by Dirk Philipp) .

Philipp said landowners should be clear on their objectives — are they turning to native grasses for use as buffer strips, summer grazing or other uses? There’s a lot of work involved and owners should be certain this is the way they want to go.

The number one issue that determines long-term success for establishing native grasses is weed control, Philipp said. In this case, that includes grasses that cattle farmers normally like.

“Fescue and bermudagrass are very good forages,” Philipp said. “But when planting native grasses, these are your main enemies.”

Start in the spring, a year before planting, by spraying existing grasses or other plants with glyphosate, Philipp said.

Work up the ground and spray again in the summer, Philipp said. As an alternative to using herbicide in the summer, he suggested planting a “smother crop” such as pearl millet or sorghum-sudangrass that would allow the land to be used for grazing.

Spray again in the fall, Philipp said, and work up the ground again unless there’s a concern with erosion. In spring of the planting year, Philipp said, spray glyphosate again to kill any residual plant growth.

Prepare the ground by disking and culti-packing afterwards, Philipp said. Plant the native grasses with a drill that can handle fluffy seed.

“Check the label,” Philipp said. “Switchgrass is sensitive to this herbicide, but it will work on big bluestems, indiangrass and little bluestem.”

If unable to apply Plateau immediately after planting, Philipp said he’s had success applying the herbicide up to four weeks after planting. “At that time, emerged natives are beyond the most sensitive stage and benefitted from an open canopy,” he said.

Philipp said don’t apply fertilizer during the first year. “This will only help the weeds,” he said.