PERRYVILLE, Ark. – Arkansas farmers who were geared up to start planting this week will have to give way to a rain delay, said county extension agents for the University of Arkansas System Division of Agriculture.

The last week of March saw some growers begin to plant soybeans, rice and corn in Phillips, Arkansas, and other counties south of I-40, as soil temperatures began to warm. 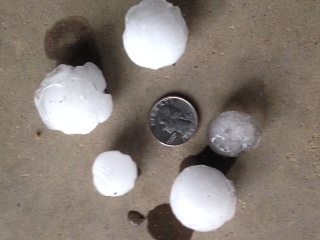 During the weekend of March 25, parts of Perry County saw up to 3 inches of rain and “we’ve gotten these one-inch rains ever since,” said Kevin Lawson, Perry County extension staff chair for the Division of Agriculture. “Our ground is totally saturated and it’ll take a while to get it to where we can plant.

Another round brought 2.5 to 3 inches of rain in some parts of south Arkansas, according to Sunday to Monday radar-based estimates from the National Weather Service. The radar image also showed areas between Batesville and Jonesboro, receiving up to 2 inches. Ashley County The powerful system also produced high winds and large hail. Extension Agent Kevin Norton photographed golfball-sized hail that fell at Hamburg on Sunday afternoon.

“If we don’t get any more rain, and get a little sun and wind, we can get started back up on Friday,” Lawson said.

He said one of his growers did get corn in the ground early, but didn’t suffer any washouts from the rains that would result in a do-over. “That first rain could’ve caused a disaster” for the grower, Lawson said.

The rain also put his extension work behind. “I’ve got a corn variety demonstration that I was going to plant on Monday, but maybe we’ll get it in later this week,” Lawson said.

“Most ground was already wet from previous rain and with this rain today, we will see some delays,” he said on Monday. “Unless we maintain hot and windy conditions, it’ll be a week and in some areas, maybe more” before growers get into the fields.

Stewart Runsick, Clay County extension chair at Piggott, said Monday that “many producers were going to begin planting corn today. The rainfall has delayed planting. Just a couple of fields of rice have been planted so far.”

In Phillips County, Extension Agent Robert Goodson said some fields received an inch of rain Sunday night and Monday. “Tractors will be out for several days, but back by the end of the week if we don’t see any more rain.”

In cattle-heavy northern Arkansas, which has been plagued by varying intensities of drought over the last few months, the rain has been helpful to producers and their livestock.

According to the weekly Crop Progress report issued Monday by the National Agricultural Statistics Service: